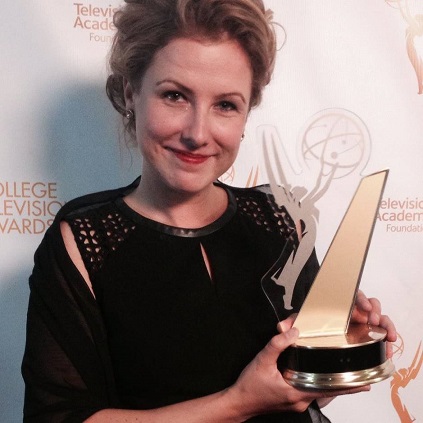 With any feature film, audience interest always centers on the starring actors, but the fine art of cinema succeeds or fails due to the efforts of three key contributors—director, writer, and, perhaps most critically, the cinematographer. Whether photographing in lush color or stark black & white, the overall look of a movie sets the tone and provides invaluable context for its storyline, and one of the field’s fast-rising practitioners is the skilled British-born cinematographer Kristin Fieldhouse.

Hers is an exacting occupation, part science, part art, that requires both acute aesthetic sensibilities and precise technical acumen— qualities that Fieldhouse been cultivating since she was a pre-teen shutterbug. “My love of photography began when I was twelve,” Fieldhouse said. ”I attended a local independent school that had an incredible darkroom and photography teacher, and was lucky enough to spend many hours taking pictures and developing prints, and exploring art galleries on weekends.”

It also became a very personal part of her life and identity. “Photography gave me the opportunity to find my voice through imagery and a means to express myself as an artist,” Fieldhouse said. “Having gone through some childhood trauma—losing my father and sister—photography was a healing process and gave me the opportunity to connect with people through an artistic medium. And that, in turn, led me to cinematography.”

Even before completing her education, Fieldhouse began racking up some significant camera department credits, contributing to such high-profile Hollywood projects as The Incredible Hulk, Total Recall, music documentary Neil Young Journeys along with numerous television and short film credits. Upon graduating, with an MFA, from the American Film Institute, her professional life as a cinematographer began to blossom.

With a solid roster of short film credits, Fieldhouse moved into feature film, shooting Michael Seater’s Sadie’s Last Days on Earth, Jenée LaMarque’s The Feels and veteran actor Amy Jo Johnson’s directorial debut The Space Between, an offbeat comedy about a man who learns his new born son was sired by another and embarks on an odyssey to find the biological father. Her experience shooting the film encapsulates Fieldhouse’s comprehensive grasp of the demanding craft.

“Amy Jo Johnson and [producer] Jessica Adams were building a team of artists and technicians that understood their vision—within the confines of an ambitious script, a micro-budget and a short shooting schedule,’ Fieldhouse said. “This was to become an epic road movie, with lots of locations, limited time, large cast, babies and a travelling limousine. They reached out and brought me on for a lengthy prep—which was essential for the project. I developed a language and symbiosis with Amy, and was also able to help organize and put in place the various cinemagraphic elements required under challenging circumstances.”

In short order, the company was off and running. “The challenges of the film were numerous,” Fieldhouse said. “16 days of shooting, always on the move, many locations, and lots of road and car work. We managed it using smart scheduling and techniques that kept crew and gear light and streamlined and by working together to overcome the obstacles that came up with locations, weather and schedule.”

It’s not all logistics—the conscientious cinematographer must also contend with myriad, far more subtle issues. “I tried to approach the film as a fly on the wall,” Fieldhouse said. “I attempted to let the themes of the film play out unobstructed, working to enable authentic comedy and to allow for improvisation. It was also important for me to use framing and lighting to bring connection to our characters and support personal and nuanced scenes that required a delicate touch. I wanted the camera to be close and personal for some scenes, and then to stand back for others giving breath and a more objective point of view.”

Fieldhouse’s sensitivity—a singular, artful empathy for story and characters—is a quality that not only characterizes her approach to the camera, it also directly affects the production itself.

“I found Kristin to be a true artist,” Johnson said. “Her ability to work with the cast and make them feel comfortable and free to experiment contributed significantly to our great performances. She and I fully collaborated on every shot and created the look and feel of the film together. She was also an incredible leader who had her crew inspired and motivated the entire shoot. We had a very demanding schedule but Kristin exceeded all my expectations and delivered exceptional image quality. I’m excited to see where Kristin’s career takes her. I believe she’ll be one of the great ones”.

That kind of intuitive, on-the-spot collaborative creativity is rare, and is certain to push Fieldhouse’s burgeoning professional reputation even higher throughout the international film community. For Fieldhouse, the prospects are limitless, but at her core, it’s all about genuine artistic expression and the impact it can make.

“I see film as a medium that connects and enlightens,” Fieldhouse said. “It has an incredible capacity to give space to voices and experiences. If I can continue to tell honest stories that inspire and challenge the status quo—that would be a true gift.”