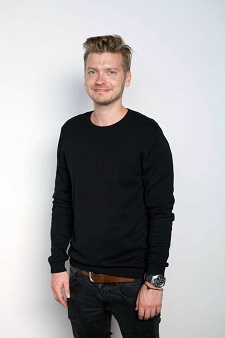 Art Director/Motion Graphics Designer Ilya Tselyutin specializes in a field of media technology so advanced that it almost seems he’s straddling a unique cusp between day to day creative facts and out of this world science fiction. Already recognized as a master in his field—a fast moving discipline that combines graphic design and animation in motion picture title sequences and television commercials—Tselyutin also excels in the exotic field of spatial augmented reality.

“This is also known as projection mapping, video mapping and 3D mapping,” Tselyutin said. “One of the earliest public displays of projections onto 3D objects was Disneyland’s Haunted Mansion ride back in 1969, but it wasn’t until the early 2000’s, when more advanced tools and software became available, that artists began using projection mapping in artwork.”

“It is a special technology used to display moving objects on various surface as a video projection, so, for instance, an entire building can be turned into a multimedia installation and become a part of a compelling story.”

The California based Tselyutin’s singular palette of skills, both as a creative artist and technical innovator, made him particularly well suited to explore this territory, a long-standing interest which he first he became involved with as a university student back in his native Russia. His fascination with 3D graphics, animation and design coincided with formal training in computer science and provided an ideal confluence for opportunity when the technology first arrived in the country in 2009.

“I was working at Channel One Russia as a broadcast designer,” Tselyutin said. “I was constantly exploring other areas of 3D motion graphics and the ways it can be implemented. And when I heard the Radugadesign agency was looking for 3D professionals to work on something that was quite new and challenging I was eager to try it.” 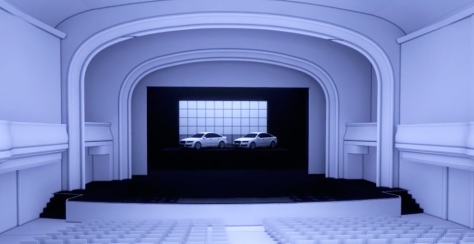 The Moscow agency was the perfect new professional home for the talented, ambitious Tselyutin, and he quickly distinguished himself in the vital new field. “I saw great potential in this and left my job at the TV channel to focus solely on 3D mapping and augmented reality,” he said. “And 3D mapping technology was unheard of in Russia when we created the first car projection show for Audi in the country.”

Created for the 2011 Audi Car Design Awards the spot featured graphics that changed the colors and tires of a 3D car model and established Tselyutin as a fast-rising 3D sensation (see it here). “I took part in all of the 3D mapping projects while working at Radugadesign,” Tselyutin said. “We worked on commercial projection shows for such clients as Audi, Samsung, some national mobile operators and many others.”

Tselyutin’s dedication and groundbreaking achievements benefitted everyone involved. “Working with Ilya was always a very pleasant experience,” Ivan Nefedkin, Radugadesign founder-CEO, said. “He was one of very few professionals in Russia who completely understood the specifics of 3D augmented reality. There was no really a university degree for what we did, so there were only a few people who could do the job. He always went extra mile to support our team by overtaking the hardest tasks to make sure the project is delivered on time—on the Audi projection show, he would stay up working all night. Ilya played a critical role in establishing Radugadesign as one of the country’s leading media agencies.”

Tselyutin’s professional reputation as an innovator and visionary quickly spread throughout the international media world. “Right after we produced that first car projection show, many agencies in Russia and abroad started implementing the same technology,” Tselyutin said. “I was invited to produce a projection show by the National Institute of Technology Kartanaka, Mangalore, India, who were quite impressed by what we were doing in Russia. I began receiving many offers from all over the world, and decided to move abroad.”

Currently residing in Hollywood, where he serves as Art Director/Motion Graphics Designer at the prestigious Trioka agency, Tselyutin is still breaking new ground, always expanding and elevating his technique. “Working on those challenging projects helped me master a great variety of new skills,” he said. “The most important knowledge I gained was learning how to successfully generate dynamic visual effects on static footage for a completely immersive effect. This proved to be very useful later on in my career,

Taken with an already impressive roster of achievements, the influential Tselyutin’s future potential is limitless.

“Ilya has a unique set of skills,” Nefedkin said. “From the advanced technical knowledge he acquired studying computer programming to his outstanding graphic design skills—he always came up with new creative ideas, challenged himself and the whole team, and pushed the boundaries of what was possible. Our clients loved it. He never ceased to amaze us with his both creative mindset and perfect technical execution.”