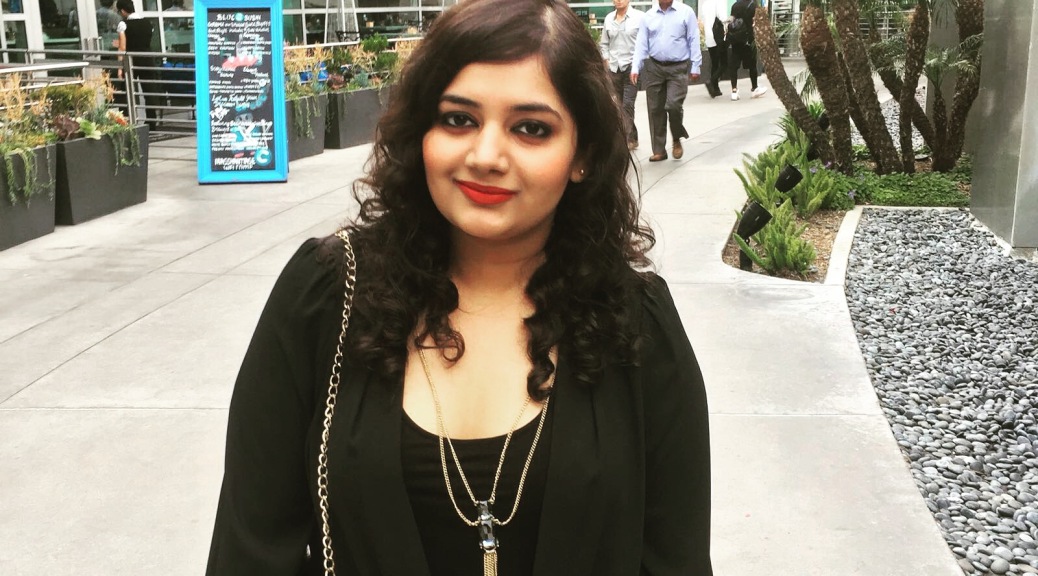 Sonia Bajaj realized her true calling while in Pune, India. During this period of transition, she was introduced to people from different cultural backgrounds and varied interests. She was in constant touch with daily happenings in the world and she also began to have a better understanding of art forms like music and literature. She was introduced to several films, television series and documentaries from all over the world, thereby exposing her to different styles of filmmaking. She began experimenting, and soon these experiments translated in experiences. She knew she had to be a filmmaker.

Originally from Mumbai, Bajaj has been able to travel the world doing what she loves. She thoroughly enjoys the aspects of making a film. As a producer, she is responsible for overseeing all five stages of filmmaking: development, pre-production, production, post-production and distribution. She creates a business plan, budget, and schedule, handle creative and business affairs, and gather cast and crew. But that is not all she does, she also is a successful director.

“While making multiple short films, I realized how thoroughly I enjoy myself during the entire process of making a film. Being a director is similar to being the captain on a ship. You have your entire team helping you, yet the responsibility of a successful sail lies entirely on your shoulders. When I direct a film, I have the opportunity to take the audiences to the world of my characters through my eyes. That’s what I like about being a director,” she said. “I look forward to narrating stories that touch the heart, that inspire an individual to overcome obstacles and live his dream, stories that educate and entertain.”

As both a director and producer, Bajaj has had a formidable career. She has worked on award-winning films such as Rose, Hari, The Best Photograph, A Broken Egg and Impossible Love. She is also the curator for the women in film series at Downtown Los Angeles Film Festival, where her responsibilities include reviewing and judging films around the globe. She has an esteemed reputation, and is respected by all she works with.

“Sonia is a professional and a pleasure to work with. She has a superb eye for truth when it comes to filmmaking and making an actor feel connected and safe on set. I would work with her again in an instant,” said Tony Ruiz, who worked alongside Bajaj on her film Rose.

With her new film Bekah, Bajaj is impressing both audiences and critics yet again. The film was just completed in May, and was first recognized at LA Shorts Awards where it won an award for Best Drama. Since that time, it has already been an Official Selection at the UK Monthly Film Festival, a Semi Finalist at Hollywood International Moving Pictures Film Festival and Los Angeles Cine Fest and a Finalist at Eurasia International Monthly Film Festival. It won the Award of Merit at Accolade Global Film Competition, the Gold Award at NYC Indie Film Awards, and the Platinum Award at Mindfield Film Festival, with many more film festivals expected for the powerful film.

“With Bekah, I had the opportunity to direct and produce the story of a young African American woman. Our entire cast comprised of African American Actors, and crew from different parts of the world, giving me the opportunity to work in a culturally diverse project. Our goal was to inspire and encourage our viewers through Bekah’s eyes. We’ve been successful in achieving that in a short span of time,” said Bajaj.

Bekah is the story of an idealistic young writer and college dropout who pursues her dream of becoming a full-time writer, motivated by the spirit of her deceased fiancé. She leaves her dysfunctional home and goes it alone facing a world that is less idealistic.

“The story focuses on the struggles of a young writer trying to break into the real world. It’s a tale of overcoming the loss of love, by fulfilling a promise that was made. At the end, it becomes all about how families need to be connected and support each other.  We wanted to tell this story to encourage families to support each other, encourage youngsters to pursue their dreams despite the difficulties that they may face,” Bajaj described.

After looking at Bajaj’s success of her other films, the main lead and co-producer Charlie Cakes, also known as Charlotte Makala, asked her to be a part of the project, knowing her needed someone of her caliber to make the film the success it has already become. Looking at the diverse nature of the film, Bajaj instantly got on board. As they began producing the film, they realized that 80 per cent of the cast and crew were all women.

“This definitely was refreshing experience to produce a film made by women and about women,” said Bajaj. “The very fact that our team was so diverse, it was essential to have a director who wasn’t familiar with the culture of the characters. I had my own take to the production, which helped us to create a fresh outlook to the story we wanted to convey.”

There were many rehearsals, and script revisions, and Bajaj, both the director and producer of the film, experimented with different techniques before filming. This enabled her to create a fast-paced productive environment on set, allowing her to get all the shots she set out for in a skilled and quick manner.

“I enjoyed directing my actors in their accent. The lingos were so different that it was a learning experience to get out of my comfort zone, learn a different style of talking and build emotions out of that. It helped to broaden my horizon and work on building varied layers to the characters,” Bajaj described.

Bekah is just one of many films that Bajaj has put her winning touch on. She is a formidable director and producer, and one that audiences can expect to continue hearing about for years to come.

Even at the start of his career as an editor back home in India, Shayar Bhansali was making innovative contributions to the entertainment industry with his work. The now multi-award winning film editor began his career as the visual media editor for The Big Indian Picture, India’s premiere online cinema magazine. Whereas most of India’s prior entertainment outlets focused on Bollywood fluff,  The Big Indian Picture offered audiences a serious look at the world of Indian film; and the videos Bhansali edited for the outlet earned the magazine national attention.

Bhansali recalls, “I worked with the producers to edit interview segments, and these interviews turned out to be so genre-defining that they became the first ever web-produced content to air on national television on NDTV Prime.”

After getting his feet wet as an editor in India, Bhansali moved to Los Angeles to complete his master’s at the world renowned American Film Institute. Once in the states, he dove in with full force creating a reputation for himself as an exponentially talented editor in the narrative film world. Some of his recent work includes Cusi Cram’s award-winning dramatic comedy “Wild & Precious,” which earned the Best Narrative Award from the NYLA International Film Festival, Mattson Tomlin’s family drama “Persuasion” and Stefan Kubicki’s “Against Night.”

For Bhansali, the art of editing is all about striking a balance between the director’s vision and what his creative voice believes is best for the story.

“I find editing to be humbling and empowering at the same time – you’re constantly making decisions about the way in which a story unfolds, but you do this within the context of the director’s vision,” he explains. “This balance of finding my own expression and balancing it with the larger creative arc is what drew me into the world of filmmaking, and editing became a way of life before I knew it.”

One of the many unique aspects of Bhansali’s gift as an editor is his ability to adapt to the needs of a project and use his creativity to solve potential problems in a way that allows the production to flow seamlessly. His work as the editor on Tomlin’s 2014 film “Persuasion” speaks leagues to why these traits are such a vital asset to any production. “Persuasion” focuses on a father’s process of coming to grips with his son’s unnatural gift for controlling people’s behavior with David Kopelev (“The Escort,” “Heritage”) starring as the son and Gregory Linington (“Indigo,” “Dune”) as the father. Early in the developing story there is a scene where Kopelev’s character has a face off with a bear, an event that instills in the father the startling awareness of how truly powerful his son is.

Bhansali recalls, “Mattson was convinced that the only way to portray this scene in a realistic sense would be to shoot it with a real bear. Given that the child actor was only 7 years old, we had to come up with a way to use a motion controlled camera rig to shoot separate plates with the bear and child, and combine them in post production with the help of visual effects supervisor Mike Pappa.”

To ensure that the production captured the two separate shots in a way that would make it possible for Bhansali to seamlessly combine them in post, the visionary editor actually spent quite a bit of time on set during those shoot days providing quick mock-ups to show the team what the scenes would like. When most of us think of a film editor we imagine them tied to their desk spending hours upon hours cutting and sewing footage together; and while that’s mostly true, having an editor like Shayar Bhansali on set can mean the difference between saving time and money or having to go back and do those dreaded reshoots.

“This level of involvement is becoming more common for an editor and when done efficiently, I find it can be an irreplaceable tool for the director and production crew,” admits Bhansali.

Much of what drives Bhansali’s work as an editor is the inherent power that comes with job to change and shape the story; he enjoys the laborious and highly creative process of sifting through hours of fragmented pieces of footage, fusing the perfect shots into fluid scenes and purposefully forming a coherent whole that will impact viewers.

He explains, “I like the process through which we rewrite the story with editing, the power to manipulate and curate the emotions of our audience with every decision we make. I’ve always been drawn to the inner workings of a film, understanding how structure and scene construction influences the way we relate to characters and story – and editing for me gives me the opportunity to do this every day with every project I work on.”

From his work as the editor of the interview series “Tete-a-Tete” broadcast on NDTV to the powerful stories he crafted as the editor of the films “Loveland,” “La Bella,” “Persuasion,” “Against Night,” “Zoya” and “Wild & Precious,” Bhansali has amassed an impressive repertoire of work that spans several mediums and practically every genres.

Up next for Shayar Bhansali is the film  “Rene” starring multi-award winning actor Xander Berkeley (“Taken,” “Airforce One,” “Justified”), and the film “Shinje,” which is in preproduction and will be directed by Stefan Kubicki.