Dance artist Faustine Lavie not only excels in one of the most demanding disciplines in all the arts–classical ballet–she also has an extraordinary ability to take on, and easily master, a diverse number of disparate styles which span the entire dance spectrum.

Whether it’s modern, jazz or esoteric contemporary hybrids like An Nuo Spiritual Dance & Art, the French-born Faustine’s limitless capacity to learn and grow as a dance artist has solidly established her as noted and in-demand force in the high pressure dance scene.

A prime example of this versatility is her membership in the acclaimed KADA (Korean American Dance Association) troupe.  Founded in 2011 by Korean dancer-choreographer Mee Jung, it’s a contemporary dance company focusing on cultural exchange through the arts. Jung and co-director Ae-Soon Kim, the co-director aim to fuse dance–the primary element–with visual arts, music, singing, painting, and photography presented at stage shows and festivals.

“I wanted to be a part of this company because I love their vision and the cultural mix they are trying to achieve,” Faustine said. “I like discovering new cultures, performing to music from different parts of the world and dancing different styles of movement.”

For the New York based Faustine, dance has always been her passion, one that manifested itself when she was just 3 years old–when she stunned her mother by asking to be enrolled in the local dance school in her native Toulon.

“Since she wanted me to do sports or some kind of physical movement, she agreed,” Faustine said. “I honestly can’t remember how I became interested in dance because I was so young, but I loved it so much that I’ve never stopped.”

Blessed, after three years of rigorous study, with Ailey’s formal professional imprimatur and bringing her own boundless store of creative and athletic dance skills, Faustine quickly established herself as a reliable asset not only in i KADA, but in nearly half a dozen other high profile companies (The DynamitExperience, Arim Dance, Nathaniel’s Dance Collective, Bloodline Dance Theatre and An Nuo Spiritual Dance & Art).

The i KADA company’s almost kaleidoscopic pan-cultural style has a special place in her heart: “With i KADA, the dance stays contemporary, but with a different influence in every choreography we do,” Faustine said. “Of course, some have influences from Korea and Asia in general, but not exclusively. Last season, for example, Kim choreographed a piece with an Hispanic influence–that’s very interesting for a dancer, to go from one register to another one like that.”

Faustine thrives on the challenges this exotic blend offers. “Some of the pieces include movements taken from the traditional Korean dance vocabulary,” she said. “We had to work hard, especially on hand details, because we were not familiar at all with this style. It was very interesting for me to learn something new like this, that we don’t have the opportunity to try or even see in Western countries.”

“KoDaFe was created by i KADA’s Artistic Director Mee Jung to provide a cultural exchange to artists from all over the world,” Faustine said. “For KoDaFe 2019, the company performed four different pieces and I was in two of them. The first, ‘Muse,’ was about the inspiration we have as artists and each dancer represented a different musical instrument, with its unique sound, like each dancer has their own unique way to move. The second piece ‘ChunHyang,’ was inspired by a 13th century Korean story about a noble and commoner who fall in love.” Both were choreographed by Jung and actually evolved during the rehearsal process, like a living organism all its own.

“These were new pieces in the process of creation, so the rehearsals and preparation were very demanding,” Faustine said. “Being a part of the creation of the piece connects you more deeply to it. We dancers had to be extremely focused to capture every detail right away, as we were learning new movements. It was hard work but done with cheerfulness, always with a smile.” 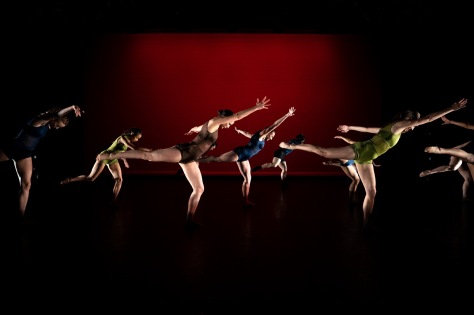 “My favorite part of the festival was the amazing people and talented dancers I shared the stage with,” Faustine said. “We became not just friends, but family. The festival is not just about art, but also humanity and love.”

Faustine’s precision, dedication, unflagging pursuit of perfection and fierce tenacity have earned a prominent position as a dance artist of remarkable creativity and interpretive prowess in New York’s very competitive dance community. She wouldn’t have it any other way.

“What I really like about dance is how you can be a different person every time you take the stage,” Faustine said. “I love exploring diverse styles and growing as an artist, because we never stop learning. Even with a great career and a lot of experience, we always have something to learn.”