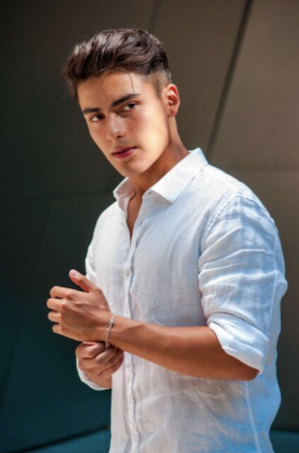 One of the most provocative present day subjects in the US is immigration. While debate is ubiquitous in the media and in political conversation, it’s the plight of the real people who travel to the States in search of a better life that is sometimes overlooked. The filmmakers of Immigrant Brothers made it their mission to portray an accurate representation of this story. Orland Pineda portrays Marcos in the film which depicts the story of three men who struggle to weave themselves into the fabric of America. The story is about Kemar, Ali, and Marcos, three illegal immigrants who meet on the streets of Los Angeles. Coming from different countries and cultures, they find out that they have that one thing in common, the dream of a better life here in America. In order to achieve this, they must first survive, pushing their own personal boundaries and doing things they have never considered possible before. The trio bonds, becoming a family away from their original one and faces situations that would easily frighten and break the vast majority of Americans. The film is a personalization of the current immigrant experience that is depicted with the emotional intensity inherent in these circumstances, adeptly communicated by Pineda and his costars.

Immigrant Brothers received numerous awards including Festival Prize at Atlantic City Cinefest, Best Drama Film at the European Cinematography Awards, and many others (including nominations at the Gold Movie Awards, Los Angeles Cinefest, & Hollywood International Film Festival). The film’s director Nicholas Joseph Cunha relied on Pineda to bring the gravitas he required. Cunha states, “During the filming of Immigrant Brothers, Orlando showed a level of intensity that went beyond the other actors that auditioned; confirming what I saw in his audition. In real life he is a very happy and charming person. I did not expect him to make such an extreme transformation the way he did for the character. His mannerisms, physicality, and emotional center were unrecognizable from the actual person Orlando is in his real life. He took the role very seriously and our film was the recipient of his hard work. I loved working with him. Orlando is a versatile actor who can change his essence in order to play other people.”

Pineda’s performance as Marcos is that of the protector of the group. He’s the father figure who keeps everyone in line but also has to ensure their safety on the perilous streets of Los Angeles. Marcos is a caring person that would do anything for those he loves. Marcos is an advisor, a provider, and a guardian but his circumstances have required him to become more aggressive than the life which he previously knew. In precarious situations he can turn aggressive, resorting to a fight or flight mode. Even in the midst of this metropolis, the trio can easily find themselves in the type of threatening scenarios that most of the population will never even glimpse. The daily struggle is presented in common situations such as when Kemar (played by Marlon Samuda) disapproves of Marcos stealing food and the pseudo-patriarch reminds him that his actions will provide enough food to last them for a week. What might be called “hunting” in ancient times is easily dubbed “stealing” now, while the actions and outcome are very nearly the same. Pineda communicates all of the inner turmoil of Marcos in these situations and challenges the audience to consider what they might do in the same situation, more for their family than for themselves.

Pineda’s own status as an immigrant in the US gave him an added empathy for the story of Kemar, Ali, and Marcos but he quickly admits that it is a minute fraction of the actual experience. In addition to other methods of connecting with the life of Marcos, Orlando prepared by spending many nights sleeping on the floor rather than a bed or sofa, going barefoot for days, and refusing other common conveniences which most of us take for granted. This created the aches and pains that influenced the physicality of Marcos as well as his irritability. The actor confirms that these slight shifts in your daily life can greatly affect your demeanor. While uncomfortable, this was essential to understanding Marcos and his “adopted” family. This type of empathy is a requirement for actors and in particular those who feel they have an important story to tell. Orlando relates, “I feel that we live in a time where these stories should be told, not because the story is new but because people are talking about it and are aware. Yes, professionals in the entertainment world can be described as dreamers but that’s not a trivial thing. I think everyone on Earth dreams. We all have aspirations. As a part of the film industry, I can help people who might never find themselves in a certain situation to somehow relate to and understand someone in need. It’s emotional and I love being part of that part of the experience of others. Maybe we can create consciousness and educate people so that they do not end up like Marcos and his friends. Maybe we can help people who are more fortunate to see these people as individuals who want to better their lives rather than just as someone who isn’t trying.”

The numerous nominations and awards received by Immigrant Brothers confirms that the audience and film community had a great affinity for the film. For an actor like Orlando Pineda, it’s the proof of affecting individuals with the film’s message that holds the greatest importance. He didn’t have to wait for the audience to watch the film to attain confirmation of the stories relevance and impact as he reveals, “When we were shooting a scene in one of the streets in downtown L.A., an old lady came up to Marlon (Kemar) while he was performing a monologue sitting in a corner next to a trash can. Unaware that he was an actor and that we were filming, she leaned towards him and gave him a dollar stating, ‘There is always more than this. Have faith.’ Most of the crew held their work because everyone had tears in their eyes. That was one of the most memorable moments, not only of the film but of my life. That lady didn’t know that her kindness strengthened our resolve that there are good people out there who care for their fellow man and we can have some small part in helping to tell this story.”