Actor James Preston Rogers is tight lipped about the plot details of the upcoming 2018 release Benjamin (Darius Films). What he is happy to speak about is his enjoyment of being in this film cast alongside so many comedic heavyweights. Rogers is so often noticed and cast for action roles (with a commanding physical presence of 280 lbs. and over six and a half feet tall) that displaying his comedic abilities alongside Kevin Pollak, Dave Foley, Rob Corddry, Peri Gilpin, Cheri Oteri, and numerous others was a joyful difference for him. His appearance as Ulf, a Russian semi-pro hockey player allowed James to stay close to the accent he had developed for the “Siberian” in “Frontier” (on Netflix) playing the nemesis of Jason Momoa’s lead character. The accent is as close as James gets in this film to any aspect of the melee that the Siberian or the combative aspect of Ulf’s hockey career in this comedic role. The inference of Roger’s commanding stature might be the premise of a fish out of water but James takes his place evenly matched alongside so many recognizable faces in the comedic acting world. As director and costar of Benjamin Bob Saget states, “Simply put, James is impressive. His comedy talent is obvious. He understood the role of Ulf and added great depth to it. It would have been easy to present the character as one dimensional but James portrayed Ulf as sincere, deep, and of course with the imperfections that make real people so funny. It was a pleasure to work with him and we were lucky to have him in the cast.”

Benjamin is the title of the film as well as the character which the story focuses upon. A teen who has decided to delve into drug use, a group of family and friends hold an intervention to dissuade him. During the act of revealing the skeletons in their own closets (in hopes of eliciting a similar response from Benjamin) these individuals all come to realize how they are perhaps living more chaotic lives than the young man they came to help. Rogers appears as the Russian hockey player/boyfriend of Benjamin’s mother Marley, played by Peri Gilpin (perhaps best known as Roz from TV’s “Fraiser”). ULF comes in as Marley’s boyfriend very supportive of her and her situation. Throughout the course of the story ULF realize that he doesn’t fit into this new world he has embarked on, and need to focus more on himself to make his dreams a reality. English is Ulf’s second language. He really loves hockey and Marley and will do anything for either of them as the wild side of the sport and this woman fulfill a part of him. Amongst all the other adults who appeal to Benjamin, Ulf is the character who is likely the most unlike them and therefore has an unexpected connection with the perspective of Benjamin.

Appearing as Ulf is the second time recently that James has appeared as a Russian (the first being in “Frontier”). The language and accent are nearly second nature to this Canadian born actor who spent his childhood and early adult years amongst a variety of cultures. His childhood friends in Toronto were German, Irish, English, Scottish, and originated from many other parts of the world. This was early training for his ears, training that Rogers put to good use in his acting career. In regards to his role in Benjamin, James describes, “The advantage I have over Russian actors is that English is my first language. You need to know that the script is written in English and is for an English audience looking for a Russian accent. It can be difficult for a Russian actor who learned English as a second language to hit all of the nuances of the jokes the writer is looking for. I’m sure it would be the same for me if I were in a Russian language film. Sometimes it’s about what you don’t say and let the space be taken up for the audience to complete the joke in their own mind. This comprehension gives me an advantage and I usually book these kinds of roles over the Russian actors. Like almost anything, you need to know your audience. If you put the accents on too heavy, you will lose your audience. You need to put on just enough and know the comedic timing for the joke to get across.” 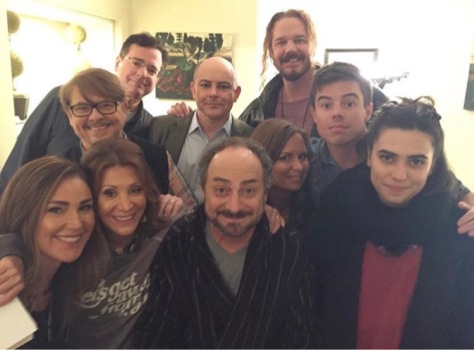 Being cast alongside so many famous comedic actors might seem intimidating, and James admits that it was at first. However, the process became so enjoyable and satisfying that any insecurities took an immediate backseat to the experience. Rogers tells that the scripted and non-scripted jokes were plentiful and the conversations off camera were intelligent and enlightening; proof that like James himself, his costars are far from one dimensional. Rogers feels drawn to roles that (similar to career courses of larger actors like Dwayne Johnson and Jason Momoa) dispel the idea that an actor who is cast in action roles does not possess the ability to be equally gifted in comedy or drama. He confirms, “Just because are tall or in good physical shape doesn’t mean that we don’t have life experiences and emotions that equip us to communicate through the camera and onto an audience. Most well-known actors get painted with one brush and it’s very rare that we get to color outside the lines. I love seeing a comedic actor cast in a dramatic role and present another side of themselves. My father was hilarious and I think that part of that comedy gene exists in me. When I was in 10th or 11th grade we’d have these things called ‘cut-fests’ at school. You’d square off with someone and trade insults. People would cut class just to watch. It was all for laughs. Between my father and the cut-fest I was working on my comedy timing through my entire childhood, I just grew into being a big guy. Benjamin has given me the chance to show that training and the fact that I’m standing alongside some of the best comedic actors in the present day entertainment industry is beyond exciting.” James Preston Rogers has taken his rightful place as the physically and comedically impressive gentleman alongside his talented cohorts and can be seen doing so in Benjamin.