It’s a requirement for a successful professional in the film industry to be versatile these days. Even so, those who are able to cultivate a sense of personal identity amidst the ability to be eclectic are among the most sought after. Actors, cinematographers, and definitely directors are the current-day elites in their vocations who are the most enduring when they have a style that is malleable to different formats while still retaining an intrinsic thread of personal perspective/self. Director Thomas Hefferon has revealed this trait in a number of films, music videos, and commercial productions. Considering his film work, it’s ironic that while the vast majority of his work (often co-written with T.J. Hundtofte) is female based, some of his most recognized and lauded films have a masculine story and center. Perhaps it’s just a natural byproduct of being male and artistic but the vantage presented in Hefferon’s films attest to his natural ease in conveying the different mental and emotional states from boyhood to manhood. The playfulness and sweet sensitivity is sometimes disrupted by the fear that boys avoid and men deny. Still, it’s apparent that there is a fondness Thomas has for his youth and he is able to take the audience into this treasure time with him via his many films.

In “The Confession”, Hefferon pays homage to the classic films of the 70’s. The production looks and feels authentic to the era. He worked painstakingly with cinematographer Andrew Edger and costume designer Natalie Conaty to authentically create the vibe of this period. Thomas notes, “The right crew really makes your life on a film livable or not. Andrew was wonderful to work with. Besides being very talented, he had just done a period film prior to this so he was in the proper mind state already. I was very lucky to get Natalie as she was working on “The Tudors” at the time and doing such fantastic work, and she of course brought her immense talent to our set.” Even beyond the visual presentation in the film, Hefferon wanted to recreate what the films of the 70’s felt like. He explains, “We definitely wanted the film to not just be set in the 70s but also almost feel like it was shot back then. We achieved this feeling mainly through the pacing of the film and the edit, and how it played out. Current day films have many more fast edits than films of the 70’s. There is almost a lingering quality to the way films were presented back then. We almost wanted to slightly bore the audience in the first half of the film, when they think they’re watching a drama and then…” One of the most enjoyable parts of The Confession is the “bait and switch” con that happens in both the storyline and to the viewer at the end of the film. The final moments of the film are completely unexpected as Thomas and his cast hold their cards close to their chest. Safe to say, the reveal recalls the great teen comedies of the 70’s that inspired this director. His adeptness in delivering this knockout punch awarded him the admiration of his cast and crew (not to mention multiple worldwide screening including the Tribeca Film Festival). The aforementioned Natalie Conaty professes, “I have worked with Thomas for the better part of a decade now and can say without a doubt he is one the most uniquely gifted people I’ve ever met. As a director he brings his vision to you without a hint of ego, eager to hear your thoughts and ideas. his attitude to filmmaking makes for a really creative environment where everyone pushes themselves to do better because they believe in the project. He owes much of his success to his auspicious mix of creative selflessness and dedication – on and off set.” 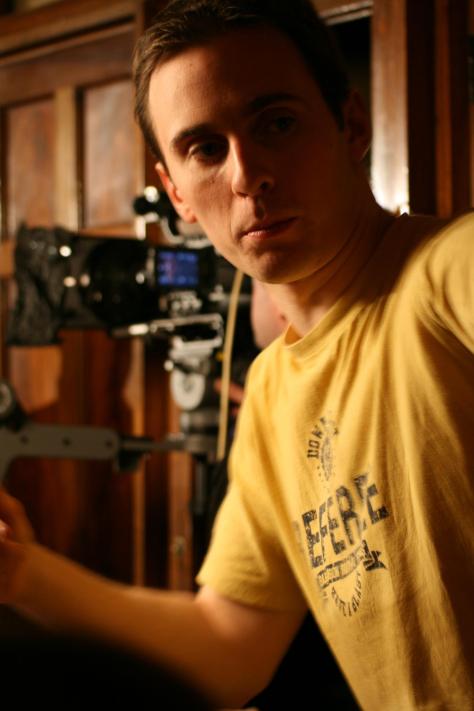 A more vulnerable and even frightening part of being a young boy is displayed in Hefferon’s “The Pool.” Most boys have experienced episodes of bullying but that’s not what at the heart of this tale. Academy Award-Nominee Lenny Abrahmson (for the Oscar Award-Winning Film Room) took a great interest in this film and Thomas as the director. Abrahmson remarks, “A film such as this relies on all the factors of film to amplify the tension, and Thomas displayed a masterful command over the collaboration between storytelling, breathtaking cinematography, believable acting and more to heighten the tension of the film, ultimately leading toward a truly powerful and impactful film. Few directors can convey such a command over the production as a whole. Thomas’s work on ‘The Pool’, where he utilized a great many tactics of top tier directors attests to his place among the best.”

“The Pool” seems at first to be a simple story of one boy’s fear of water (Sam) and his friends Charlie and Ben pressuring him to be in a breath holding contest with which he is not comfortable. The added pressure of appearing weak in front of the fairer sex is added when Katie shows up at the pool. Explaining that his fear originates from an experience with an unknown presence during his younger days, Sam stirs his own bravery but what happens next turns potential fear into a life altering experience for all of them.

Thomas reveals that his inspiration for the tension in the story and the film comes from his view of childhood. He notes, “I always felt like there was a window of time from about ages twelve to sixteen or seventeen when you’re growing up outside of adult supervision. You’re figuratively trespassing in this space where there are no rules and if there were, no one is truly able to enforce them. This is the time I experienced my most intense bullying and when I saw other be bullied in ways that changed me. ‘The Pool’, which I co-wrote with T.J. Hundtofte takes that idea of metaphorical trespassing and makes it literal. These kids are literally in a place they’re not supposed to be, at a time where they’re not supposed to be there. No adults. No supervision. So what I tried to do was create a sense of magical realism by having the entire place feel slightly heightened, as if it didn’t really exist in our reality. It’s reality-adjacent, to borrow a phrase.” One of the very effective ways that was done to give this sense of heightened reality on set was by laying down black tarp at the bottom of the pool. On camera this created the sense of no bottom in the pool, only darkness. It’s as if you’re looking into the deep of the ocean.

Following up “The Confession” appearing at the Tribeca Film Festival, “The Pool” was nominated at this prestigious event for the Jury Award Best Narrative Short. While it was a thrill to return with another of his films so soon, Hefferon concedes that seeing the attention the film’s young actors received was even more rewarding.

“The Heist” is the member of this film trio which finally makes the leap into adulthood and presents the type of fast paced, comical, and sometimes adversarial relationships that men can sometimes share. In this film, three would-be bank robbers sit in their car as they prepare to pull off the heist of their lives. But Francis’ minute instructions are quickly overshadowed by the rest of his gang’s petty arguments about anything from the colour of the ski-masks to who gets to be the cool, silent guy with a hair-trigger once inside the bank. Planning is derailed more and more by the crew’s wild tangents until they finally just decide to go for it and make their move. Only to find the bank closes early on Fridays.

What stands out most about this film is that Thomas is able to deliver a compelling and humorous story that is 99% dialogue and takes place entirely inside a car. The description sounds dichotomous to an entertaining experience and yet it proves to be very much so. Pressure can be a powerful motivator and can instill energy into performances and a production. A self-described guerilla production that was expeditiously conducted in the dead of winter outside (with only the cast inside the car), there was a deluge of intensity on set. Thomas relates, “We knew for this to work the pacing had to be lightning fast. Banter depends a lot on good editing, but you also need the right interplay from the actors on the day. Luckily our protagonist Francis, was played by an experienced Irish sketch- and Improv actor who got the tone we were going for right away. We were determined not to be derailed, even when our main actor forgot to put on the handbrake and the car started rolling onto the main road with crew in tow. Luckily no one was around at the time, but it was a bit of a scare.” Both scares and laughter are found in Hefferon’s many films, onscreen and off.