Film editor Edward Line made his name editing commercials and music videos, working with award winning directors including Traktor, Matt Lambert, Paul Hunter, Jonas Akerlund and Lucy Tcherniak. A natural collaborator and storyteller it’s not surprising that his talent led him to cutting short films where he has continued to fine tune his craft. It’s a well-rounded career course which Line explains, “From years of cutting commercials and music videos, I have become very disciplined in how to tell stories efficiently and within a set duration. While these skills are transferable, working on short films has relieved me from editing to time restraints and allowed me to approach performances in different ways.  With short films, I’m always thinking of how an edit decision will affect the audience emotionally in a later scene, as character develops and stories unfold. This is true for commercials as well, but of course there is much more breadth in a short film which typically runs for 10-20 minutes, rather than a 30 second commercial.”

Confirming his affinity for narrative editing, Edward’s short film work has been selected and recognized at international film festivals including Tribeca, Sundance, BAFTA and The Academy Awards. Here’s a look at some of his favorite work. 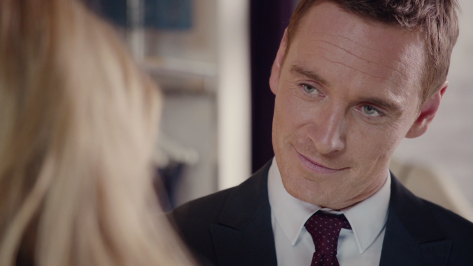 Not strictly a short film, but a notable promo film that showcased Edward’s sensibility for dialogue cutting.  The film was a collaboration with director Johnny Hardstaff and featured actors Michael Fassbender (Prometheus, Hunger) and Natalie Dormer (Game of Thrones) in a sexually charged scene that takes place in a lingerie store.  Edward subtly edited nuanced looks and dialogue to create a tension filled scene which left the audience asking questions, as intended by the filmmakers. This promo film was used by 20th Century Fox to market the release of Ridley Scott’s film The Counselor in 2013. He communicates, “I really enjoyed editing this film. Apart from enjoying the first class performances from Michael and Natalie, the suspenseful and dreamy tone of the film was really appealing.  I enhanced this mood in the edit by paying close attention to the characters subtle eye movements and breathing, then hanging on these moments for longer than comfortable. During the edit, I added the ambient dream like soundtrack which further heightened the tension and atmosphere. When I showed the director my first cut he wasn’t expecting music, but he loved my music choice and it was included in the final film.”

In 2015 Edward teamed up with director Gary Shore to edit the film St. Patrick’s Day.  The film concerns a teacher who gets pregnant, with her doctor warning her, “we’re not certain with what.” It turns out to be (in a riff on the legend of st. Patrick expelling snakes from Ireland) a reptile, but her maternal love has no limits. The dark comedy was part of the “Holidays” anthology feature film and selected for the Tribeca film festival in 2016. Edwards relates, “I was keen to work with Gary Shore on a film after we had collaborated on two commercials in 2015.  Unlike the commercials, which were action packed and heavy in visual effects, this film is a pure narrative dark comedy. The film had over 12 scenes and included several nods to horror and comedy genres, which were fun to play with in the edit. These included creating a comical 1980s style documentary about the myth of St. Patrick. I edited this in a more literal ‘see-say’ style where the voiceover describes exactly what the images are doing, but in an exaggerated way. In the edit, we added a VHS video effect and traditional Irish music to add authenticity. We were so pleased with the resulting ‘mini-film’ that we used it for the opening scene.”

In 2016 Edward teamed up with longtime collaborator and director Sam Larsson (of multi award-winning collective Traktor) to edit “The Painters”.  Edward recalls, “Sam and I worked together on my first commercial edit in 2011 and have collaborated numerous times since, so when he wrote his first short film it felt natural that we’d team up again.”

The short film follows four house painters who kill time in a parked van as they philosophize about life and recall anecdotes, revealing a glimpse of who they really are. The editor communicates, “This film was a dark comedy with some serious undertones and an editorial challenge being a pure dialogue piece that takes place in one location, inside a van. The success of the film relied heavily on my edit to keep it entertaining and it took some experimenting before we found the film’s rhythm. During the edit I wasn’t shy to cut lines from Sam’s script that we felt were not helping the story, and Sam was very open to my ideas and choices.  As ever with editing, it was important to cut in order to move the story forwards and for emotion, and this was a perfect film to test that theory.” Larrson notes his affinity for the professional partnership he has experienced with Line as he states, “I have always held held Ed Line in high regards for his professionalism and dedication ever since I started to work with him back in the mid 2000. Ed is a great collaborator and very adept at his craft. His intelligent story-telling and comedic instincts have made him a pleasure to work with on every job we have done together. His skills for sound design and broad musical knowledge are invaluable and elevate the films we have worked on. He has a profound dedication to each project and will often stay involved even after his defined role is complete. He is one of the first editors I turn to when I am crewing up for a project.”

The Painters was selected for L.A. Shorts Festival in 2019 and will continue to be seen on the festival circuit into 2020.

Inspired by racial tensions in East London, “Wale” follows the story of an 18-year-old mobile mechanic, who learned his trade whilst serving time in a young offenders institution.  After his release, he attempts to get his business going after being hired by the mysterious character O’Brien.

The ongoing tone that permeates the film the story is one of suspense and masterfully achieved through a blend of the director’s vision and editor’s pacing. Edward’s influence is prominent from the opening montage of Wale in which the footage slows down, causing the image to ‘strobe’ as it repeats frames. This editorial technique helps to convey danger and unpredictability and sets the mood for the rest of the film.  Later, in the scene where Wale [the main character] goes to O’Brien’s house to discuss fixing his car; Edward identifies nuanced moments in the character’s performance and lingers on shots to cultivate an uneasy and mysterious tone. The editing is full of restraint in a key driving scene where Wale wrestles with many emotions as Edward holds the shots longer than one might think possible; allowing the audience to really feel Wale’s emotions and try to understand where his mind might be taking him. Edward magnanimously states, “sometimes not cutting is the best decision an editor can make.”

Director Barnaby Blackburn recalls, “Ed has an extraordinarily natural talent for storytelling. He is able to quickly grasp the vision of the filmmaker and translate it on to screen in addition to his innate understanding of the appropriate tone, pacing, and emotion for every film he works on. Ed is not afraid to experiment beyond the traditional norms of film editing, which continually makes for groundbreaking work that pushes the craft of editing, and filmmaking in a broader sense, forward.”

Wale was very well received and boasts an impressive festival run, winning the prestigious Grand Jury Award at Dances With Films and ‘Best Short Film’ at a further five festivals.  The culmination of its success came in being shortlisted for an Academy Award (Oscar) and subsequently being nominated for a BAFTA in the ‘Best Short Film’ category.

The success of the film points to the strength of the relationship between Director Barnaby Blackburn and Edward who have forged a strong working relationship.  As such, they collaborated again in 2019 and completed another short film ‘Dad Was’. This film follows the story of Mattie, an eight –year-old boy as he gives the eulogy at his father’s funeral. The production reunited many of those who worked on ‘Wale’ and will be submitted to festivals in 2020.