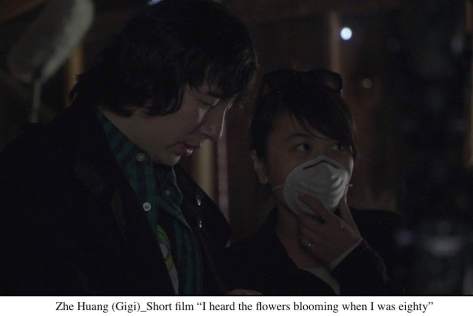 How do you create a film about an eighty-year old man transporting a piano across town to perform a solo concert? Well, besides having all the creative professionals involved…you hire the amazing producer like Huang Zhe (aka Gigi). With a variety of different types of productions (film, commercials, etc.), Gigi quite simply knows how to maneuver every piece into its perfect place so that the artists can get along with the job of being artists. The most classic of automobiles need the proper propellant to deliver performance and so does every classic production. When director Zhen Pan started off with a rough test shoot, he reached out to Huang and enlisted her help to put the film on track. After reading the script and conferring with Pan (whom she had worked with previously on other productions), Gigi decided to sign on and bring new life to the film. It was a well contrived decision as I Heard the Flowers Blooming When I Was 80 won Best Screenplay in 4th Golden Panda International Short Film Festival and was a finalist in the IndustryBoost Competition. Huang’s ability to reset the course for this production and empower it to such great success is a testament to the fact that a great producer is paramount for filmmakers to achieve their vision.

Writer/director Zhen Pan is often referred to as China’s Wes Anderson. Within his decade long career, he has amassed numerous lauded productions. It was highly important to him that I Heard the Flowers Blooming When I Was 80, matched up to those in his impressive resume. He recalls, “We had a rough testing shoot and it didn’t quite go well. A lot of things went wrong and we just couldn’t figure out a way to make things work the way we needed them to. It was not until Huang Zhe stepped in to become our new producer that we were able to re-start the  project. Not only did she manage to find all the locations that we needed, but she also re-grouped the entire team and kept everyone energetic and focused on creating something that we would be proud of. I couldn’t thank her enough for being the production leader and making everything happen. This film would have been impossible to make and receive the recognition it has been given without Gigi.” Huang is quick to admit that she was able to make use of some prior work, essentially retaining about a third of previous footage. New schedule shoots and permits required quick and accurate designing to get the film in on time and within budget. The film required a consummate professional like Huang to guide it into a proper “landing.”

While the film focuses on one main character, the cast numbers more than thirty and required a sizeable crew. I heard the Flowers Blooming When I was 80 is a heartwarming story of recalling and achieving your dreams. On his 80th birthday, a lonely old man named Larry (played by John S. Boles) meets two children who are doing a school survey on the street. The little boy asks Larry:” What was your dream when you were my age?” This reminds Larry of when he was a little boy and wanted to hold a piano concert. Everyone dissuaded him from the idea as his parents believed his older sister to be a better pianist and more deserving of attention. Everyone ignored the boyhood Larry’s feelings. With the gradual growth of age, little Larry became old and eventually forgot his dream. On his eightieth birthday, Larry spent time alone, as he usually does while his children made excuses to avoid their father’s birthday. Larry suddenly remembers the question that the little boy asked him in the morning,” What was your dream at my age?” and decides to pick up his dream again. Moving his piano from the garage to the center of the small town, he interrupts the lives of the town’s commuters, but he finally achieves his dream of holding a piano concert…in spite of having no audience. The film gives wings to the idea that our dreams are for ourselves and not simply to be pursued for the appreciation of others. The very idea itself is a perfect description of a successful producer’s role. It’s a concept which Huang has thoroughly embraced. Gigi confirms, “The most important thing for me is seeing the stories that I like and love to produce. I was attracted to this production by only seeing the film title, and stepped in as soon as I read the script. I knew the problem was that the film didn’t have a proper plan and schedule. It was also highly important to have a crew which can work well with each other. A talented crew is so important, but the most important thing is keeping a happy filming environment.  Everyone should enjoy what he or she is doing. I decided to regroup the crew for this film, meaning that I found a totally new crew for this production. I started the pre-production earlier this time. Since I prepared early and had good communication with the city, we got the street closure for free…nobody was unhappy about that.”

A seemingly “doomed” production that couldn’t quite get off the ground, I Hear the Flowers Blooming When I was 80 went on to be an award-winning film because Gigi Huang recognized the potential of the story, cast, and crew. Investing her talents with those of this production, it went on to gain the type of notoriety that all its participants hoped for. Gigi comments, “To be honest, I was really happy and felt honored that we won the ‘Best Screenplay’. It might not have gained notoriety or prestige for my career personally but that’s not why I’m a producer. I’m perfectly happy to sit back and know that I was able to achieve exactly what I set out to do and that allowed Zhen Pan and everyone involved to be the artists that they are.” …which is exactly what I heard the Flowers Blooming When I was 80 is all about.