When art is malevolent it is divisive, seeking to focus society on what “others” are doing to make your life worse. When it is mediocre, it serves little purpose at all. But, when art is at its best, it gathers all peoples in and draws their inherent goodness out of them. The creators of art are no different than every other segment of society in the fact that they must daily choose to use their abilities to draw us closer to each other or tear us apart. The WATER Project seeks to cultivate the former. Also known as the Israeli-Palestinian Cinematic Project, this endeavor saw ten Israeli and Palestinian directors embark on a journey to create films, fiction or documentary inspired by water. Under the belief that water symbolizes the source of possibilities at the primal core of all things, these filmmakers took part in joint meetings in Tel-Aviv presenting their ideas to one another. Produced with full creative freedom with mixed crews of Palestinians and Israelis, these films reflected the personal and courageous perspectives of both sides view of reality. The film Eye Drops was part of the WATER project which was screened at more than 20 Festivals around the world, receiving significant press attention. The project premiere was at the Prestigious Venice international film festival as the opening film of the “Critic week” program. The WATER project received an Amnesty award for its effort to bring Palestinian and Israelis closer. Eye Drops is a reaffirming vision of the ability of all people to see beyond their differences, particularly in a subject matter as provocative as this one. The film received global attention at festivals including the: Tertio Millennio Film Festival (Italy), Stockholm International Film Festival, Busan International Film Festival (South Korea), New Middle East Cinema film festival in Philadelphia, and many others. The look that Cinematographer (Israel born) Avner Mayer created depicts both the despair and hope of the people and this land. Overcoming the almost instinctual reaction of this land’s natives and the world’s view of it, Meyer’s imagery and design enables the audience to see the humanity underlying it all.

It’s easy to make assumptions about someone without getting to truly know them as an individual. That can be applied to the viewing audience of a news program, a film, or even a neighbor. In Eye Drops, Mohammad Bakri lives with his two sons (Saleh and Ziad) in a small flat in Tel Aviv. Their neighbor Sarah (played by Rona Zilberman) is a Holocaust survivor who asks them to assist her with her eye-drop medication. A unique and mysterious connection grows among them. The movie is about compassion and the ability to get along in spite of differences in religion and race. The filmmakers approach to the composition was to create a feeling of empathy. In order to convey this, the movie is almost always shot at the eye level of the characters. The hope for this was to allow viewers to see through the character’s eyes and souls. Many of the shots include the entire cast in order to create a feeling of unity. Exterior shots were designed to be cold and intimidating, almost as a mirror to the political climate in Israel at that point during the second Intifada (https://en.wikipedia.org/wiki/Second_Intifada). In contrast, the houses are portrayed as places of great warmth in hopes of showing the love and compassion hiding inside this political climate. All that is need is to go into someone’s home and talk with them in order to find real, warm human beings.

It was Mayer’s task to create these emotional vignettes for Eye Drops. Mohammad Bakri (director/writer/actor) needed a highly skilled professional behind the camera who not only understood how to help him capture the story but to also understood the people and emotions that motivated them. Designing everything from the lighting to the framing of the shot necessitated a professional and emotional eye. Avner communicates, “As a DP I feel my work is always to translate the director’s vision into images. A lot of the preproduction process for me concentrates in creating the visual bible of the movie. When you work with new filmmakers, there are two main problems. First of all, their visual lexicon is not always clear; meaning you need to find a common language to talk about images. That’s always hard but it seems to be smoother with more experienced filmmakers. The second issue regards logistics and the amount of time needed to achieve some effects. It’s much easier to talk about shots than actually to perform them on set. It’s important that the director will realize what is possible to do and what’s not inside the budget and time constraints, prioritizing the important story beats. People don’t often realize that this is a lot of what my job entails. Mohammed is well known and respected in the Israel film community so it was a pleasure to work with him and it was much easier than working with a ‘new’ director…but there are always challenges. Mohammed wanted to shoot in the actual real locations. It was a blessing and a curse as a DP. The locations had a lot of charm and were very photogenic but the big minus was regarding space. This was mostly in regards to the house, which was a little too small. We were limited in our options with that space. In the end we found creative solutions and solved that issue.”

Eye Drops received voluminous praise and accolades from the community and critics. One of the most vocal fans of Mayer’s work on the film came from its creator. The fact that Mohammad was also the lead actor in the Eye Drops made Avner much more aware of the acting. Normally this cinematographer focuses on the visual side of the imagery; did the characters land in the right place? Is the lighting precise? Etc. Bakri praises Avner’s work and awareness declaring, “I honestly couldn’t have done this movie without Avner’s Support. It was my first narrative film, and coming into the movie there were a lot of elements I didn’t expect. Avner was my right hand, helping me in planning the scene blocking and shot selection. We were on a tight schedule and Avner got us there in time. I really think Avner is a real talent! He’s very committed to his work, he communicates well, and his visual perception and imagery is stunning! I’m never surprised to hear that he’s doing well in the industry, he deserves it!” 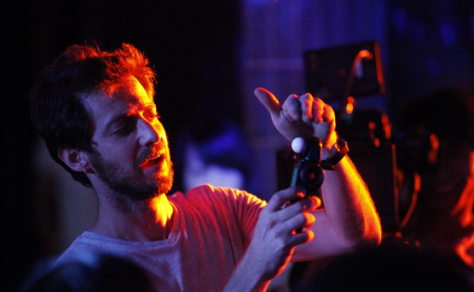 The climax of the film is when Sarah’s eyes are finally well enough to make out the faces of her helpers. She sees that they are in fact the individuals who she would have avoided if she had seen with her vision rather than with her heart. Eye Drops makes a profound statement that will hopefully predict the future.