Canadian actress Lanie McAuley has a diverse set of roles on her resume. A pro snowboarder in Aeris, a driven dancer in Center Stage: On Pointe, Hollywood starlet in The Unauthorized Melrose Place Story, and many others. None of them were cathartic in the same manner as her role as Heather in Lost After Dark. Far from her normal films, Lost After Dark is a straight up horror/slasher film which pays homage to the 80’s films that gave birth to the genre. McAuley’s portrayal as Heather (an obvious nod by the filmmakers to the film Heathers) displays the actress in all of her spiteful and venomous bitchiness. The role gave Lanie an opportunity to play a character possessing none of the endearing qualities found in many of her other performances, yet audiences still found a way to make her one of their favorites (likely THE favorite) cast member of the production. With a deluge of one liners that portray Heather to be every bit of the archetype bitchy girl in a slasher film, McAuley’s sense of comedic timing gives a release to the tension found in the frightening tale. It’s the perfect combination of release, terror, and vindictiveness that makes this role (and the actress) so memorable in Lost After Dark. Writer/director Ian Kessner recognized the actress’s ability to clearly communicate Heather’s energy from the moment he saw the audition tape. He recalls, “She was my first and only choice for the role of ‘Heather.’ None of the other actors in contention for the part even came close to displaying Lanie’s level of talent. She’s natural, intuitive, and blessed with amazing comic timing. Lanie can make you laugh just as easily as she can make you cry. It’s crazy! On screen, she crafted a masterful performance that audiences fell in love with. The depth Lanie brought to the role made her character incredibly likable and relatable, and contributed immeasurably to the film’s ultimate success. When the movie was first released, I attended screenings at prestigious film festivals around the world. Lanie was always singled out by the audience as the one they loved most. That’s a testament to her tremendous talent and skill. And it’s the reason I’m writing a role for her in my next film as we speak!”

So how does one become “the bitchy girl” when you are known for being considerate, amenable, and a consummate professional?  When questioned, McAuley tells of her love for movies like Mean Girls, Heathers, and The Shining. This cocktail makes considerable sense when viewing her performance in Lost After Dark. While she was confident in her ability to deliver a great performance as Heather, she remarks, “Ian [Kessner] hired me off an audition tape. He phoned me and said, ‘When I watched your tape, I knew you were my Heather.’ It was really flattering… although it’s a bit of a double-edged sword because if you’re the obvious choice to play the bitchy girl…is that a compliment?” Playing the role very close to her audition (an occurrence that almost never happens in film), McAuley expanded her understanding of Heather by voluminous viewings of the genre, from the 80’s through to modern productions. She knew that the character would have to be grounded in the archetype but play to the sensibilities of modern fans. Her attempt was to honor the tradition while breaking fresh ground in her presentation. 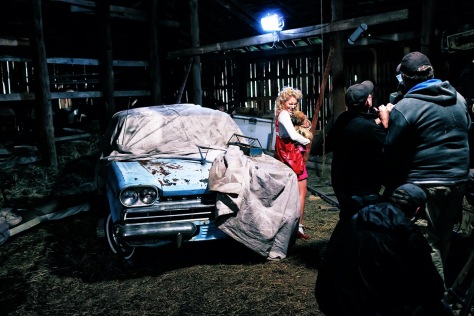 The dichotomy in Heather is that her dark and self-centered demeanor fuel the comedy. The two are intertwined and as complimentary as sweet and salty. The approach was carefully crafted to McAuley’s strengths in comedic timing. She comments, “I was thrilled that Ian was happy with my comedic timing! I’ve spent a lot of time in acting classes working on comedy in particular. Growing up, I loved being the funny girl, so I’m sure a lot of it comes from that. I’ve definitely had experience with the bias that attractive women can’t be funny; I’ve been in a lot of auditions and even social settings where people say, “Wow, you’re actually really funny.” as if it’s incredibly surprising. I booked another comedic role this year [Bad Date Chronicles] where I had the director and producers in stitches in the audition room. It’s satisfying to make people laugh. I hope that in my career I can help destroy the stigma that women can’t be funny. There are a lot of women out there blazing the trail who are stunning and hilarious: Kristen Wiig, Amy Schumer, and Emma Stone are some of my favourites.” Lanie continues, “I think a big part of why I was singled out as the audience ‘favourite’ was because I was the comic relief. In a slasher film, there’s so much stressful content…the audience needs a break. I’m lucky my character was written to be the funny one. Plus, everyone loves a good mean girl. There’s a guilty pleasure that comes with watching someone say nasty things. So if the audience was digging it, I’m flattered; it means I did my job right. Despite her less than redeeming qualities, I tried to make Heather likeable where I could. There is one scene where she says, ‘I don’t wanna be eaten by a cannonball!’ The comedy is in her idiocy, but there is almost a level of sympathy you have for this poor girl being so dumb (which is aided by Johnnie’s constant criticism of her). I think audiences had a soft spot for her in that way.”

Some of Lanie’s performance might have been aided by the environment and situation during filming. Production was nocturnal and usually in freezing cold temperatures. Add the requirement of Lanie’s character to be crying in hysterics, screaming, spouting vitriol, and running at top speed in high heels…it creates a weird head space for any actor. Channelling these aspects into a great performance is what McAuley does best. Lost After Dark premiered in the U.S. at Screamfest Horror Film Festival in LA, and had its European festival premiere at the IFI Horrorthon in Dublin, Ireland. The film also screened at Nocturna Film Festival in Spain and Fantasporto Film Fest in Portugal and was nominated for “Slasher of the Year” at the 2015 Moviepilot Horror Awards and “Trashiest Trailer” by the Golden Trailer Awards. Lanie was highly appreciative of the warm embrace the fans gave Lost After Dark noting, “I definitely think horror fans are their own breed! For one thing, they’re extremely dedicated. They know what they like and tend to have a really thorough understanding of the horror genre and sub genres. It’s cool to see. They’re really passionate. A lot of film & TV fans just love the good-looking actors and media hype; horror fans really care about story and the art of the genre.” In a genre which earnestly states about Heather and her ilk “The meaner, the better”, Lanie McAuley is one mean Heather!