­­­­    There have been many, many films about World War II. With subject matter as prolific as this it is difficult to find a new angle. The film All These Voices is one of the few films to achieve this goal. The film’s producer Beatrice von Schwerin understood this when the opportunity came her way. While history informs us about the events, the arts enable us to comprehend the lessons learned as well as to take on the emotional quotient of these events. It is often true that the perspective of a war is viewed differently based on your geography. It is this fact that helps to make von Schwerin the perfect person to oversee the making of All These Voices. In addition to her excellence as a producer, Beatrice hails from Europe; giving her an ideal perspective to produce this Hollywood film. A member of Swedish nobility and possessing a resume of celebrated European film work, this producer brings many obvious talents…as well as a few less obvious ones. All These Voices struck a resonant chord. The award-winning film was screened at a wide variety of festivals including; AFI Film Fest (Los Angeles, CA), Carmel Film Festival (Carmel, CA), American Film Festival (Wroclaw, Poland), LA Polish Film Festival (Los Angeles, CA) ICARO Festival International de Cine (Guatemala) Las Vegas Film Festival (Las Vegas, NV – Winner Best International Short), 24 FPS International Short Film Festival (Abilene, TX), Kino Otok Isola Cinema Festival (Izola and Ljubljana, Slovenia), LA Jewish Film Festival (Los Angeles, CA), Resistance Film Festival (Tehran, Iran), Southway Film Festival (Mykolaiyy, Ukraine), Centre Des Arts (Geneva, Switzerland – Special Screening and Lecture), European Student Film Festival (Geneva, Switzerland – Special Screening and Lecture), Newport Beach Film Festival (Newport, CA), FIC Autor Film Festival  (Guadalajara, Jalisco, Mexico), Washington DC Jewish Film Festival (Washington DC, MA), Woods Hole Film Festival (Woods Hole, MA). It’s important to view this list as a whole to understand that All These Voices had such a major appeal to so many different sections of the world population. Based on the locations of these screenings, we can easily assume that regardless of cultural, economic, or religious affiliation, these audiences were intrigued and attentive to the film’s message. This is proof that films which don’t involve CGI or superheroes can have mass appeal to audiences with many varied lifestyles. The fact that Beatrice was able to produce this film on a minor fraction of the average Hollywood budget is a major achievement for any production these days. 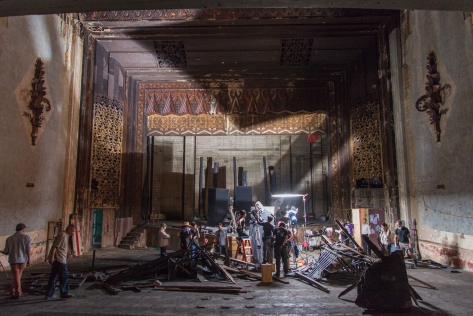 All These Voices is highly unique in the way that the story is presented. The film takes place in the days following the end of World War II. A young SS officer has sought out refuge by hiding in an abandoned Polish theater. A theater troupe of survivors enters to celebrate the end of the war. Having camouflaged his identity, and remaining mute so as not to reveal his native German tongue, the soldier joins the survivors in a vibrant celebration. As he witnesses the expression of their painful past, he is forced to come to terms with his complicity in their grief. It’s an idea that seems quite possible to have occurred in post WWII Europe. Multiplying the ease with which the audience can accept the story is the location. Nothing could be as appropriate as watching a film in a theater while the action takes place in a theater. Of course, with the events taking place in 1945 Poland, the surroundings needed to reflect that era. Beatrice chose the Roxie Theater in Downtown Los Angeles. Hollywood continually proves that its ability to be malleable is one of its greatest assets. This attribute, in addition to the talented community, is what has interested von Schwerin in possibly pursuing a residency in LA even though she has already experienced great success as a producer in Europe. She concedes, “Hollywood has always been the center of film; I don’t think that that will ever change. The film industry has been active here for over 100 years. The major studios are still located in and around Hollywood. It falls naturally that once a center for any type of industry is built, it stays there. I am actually looking forward to the day when I am part of a movie that will shoot its full production days in Los Angeles; it would be wonderful, to be closer to home.  I know that the shorter commute home would be nice [laughs].”

The production All These Voices took on some highly difficult tasks, not the least of which was the presentation of its theme. Making sure that the story was told in a proper and respectful way was the greatest challenge. The Holocaust and the effect that it has had on people is a very important story to tell.  Beatrice reveals that she gained some new knowledge from her director and multiple-productions collaborator David Henry Gerson. She notes, “I had what I thought was good knowledge about the Holocaust and its effect on people. However, working with David Henry Gerson helped me to get a stronger sense of it. Seeing it from David’s point of view, he has family that lived through the holocaust, and hearing his stories together with their stories has opened my understanding. None of my direct family has ever lived through such a trauma, so this has definitely helped me understand in more detail what the survivors had gone through.” It is obvious that Gerson was appreciative of von Schwerin’s attention and care of the subject matter as well as her producing skills as he comments, “Beatrice cares deeply about protecting and supporting the creative vision of the film. Working with her on All These Voices made this more apparent to me than ever before. She is an utmost professional, who inspires greatness and action in her crews and those working with her. Everyone performs their best having Beatrice around as a producer. Regardless of whether it was with myself as the director of any other member of the cast and crew, she listened carefully, assessed scenarios swiftly and effectively, and always, always, always was 110% prepared. Her intelligence governs all of her decisions. She has a rare ability as a leader and is a great force of positivity, effectiveness, and inventiveness. Making this film without her would be inconceivable.” The film’s writer, Brennan Elisabeth Peters echoes this sentiment stating, “As the screenwriter on All These Voices, having a producer as capable as Beatrice supporting my vision was crucial to its development and execution. As an artist, an important part of my process is thinking in terms of possibilities rather than limitations, especially on the script level. Unfortunately, due to the nature of filmmaking as a particularly logistically challenging and collaborative art form, this is not always possible. On other projects, I frequently feel the need to hone my vision and rein in expectations based on the limitations of my collaborators. However, with Beatrice on All These Voices, I truly felt free and uninhibited to write a script that was ambitious, gratifying, and, ultimately, award-winning. That was due in large part to my faith and trust in Beatrice as a producer.” One of the most difficult obstacles for the film is probably unnoticed by the majority of American audiences. All These Voices is extremely detailed in its recreation of the era and location of the events taking place…even down to the language being spoken. As producer, von Schwerin had to be involved in just about every aspect of the film production. This meant making sure that the dialogue was spoken correctly and believably. Beatrice states, “The cast on ATV were a very special bunch. Seeing that the film is all in Polish and German, probably the hardest part was making sure that the dialogue and pronunciation was correct. Parts of our cast were born and raised in Poland and some were not. Our film was seen all over the world, including places where Polish and German are the native languages; this required us to be painstakingly critical of the language in order to be authentic. I’m really proud that we were able to achieve this goal so well.”

It’s hard to imagine a young Beatrice von Schwerin roaming the grounds of her family’s castle in Sweden and then maturing into this commanding presence on set. How many of us would leave a comfortable life of adulation and nobility in order to face challenges day after day on a production? Beatrice conveys this commitment best in her own words declaring, “Producing is never an easy job, if it were easy, I would probably not be working as a producer. I need a proper challenge and producing gives me that challenge. When I moved to LA I promised myself that once I stop smiling when I see the Hollywood sign, I would quit my job and move back to Scandinavia. I am still smiling.”