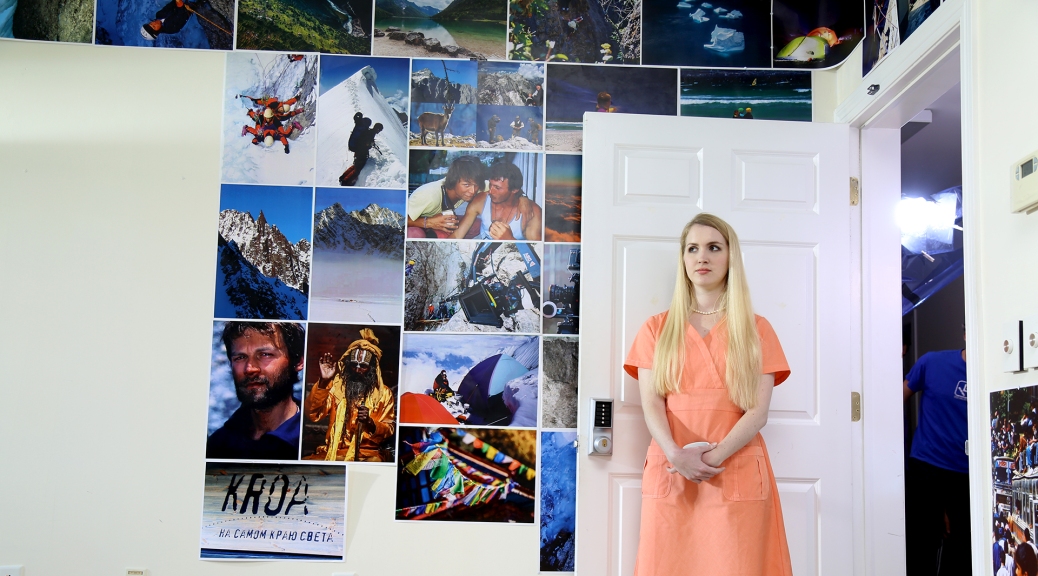 Eight and a Half Circles is a movie which makes the viewer disoriented in an intriguing way. For filmgoers who prefer not to have the action spoon fed to them, this passion piece by filmmaker Gregor Kresal is premiering at the Teplice nad Metuji film festival in the Czech Republic and screenings at the Poprad film festival in Slovakia and at the Spotkania film festival in Poland. The female lead of Eight and a Half Circles is Slovenian born actress Ana Roza Cimperman. Cimperman’s performance as Cat is luminous and yet ethereal, which is exactly the reason Kresal states that she was the very first actress he thought of when he created the role. This film which defines the term psychodrama, allows viewers to enter the altered state of reality of a man who is grasping feverishly to understand what is reality and what his life has meant to those around him. Eight and a Half Circles delivers with a great surprise ending but keeps you guessing about what is fact and what is self-fulfilling/desired reality until the very end.

Actress Ana Roza Cimperman is proof of two things in film; the film community is global now more than ever, and Hollywood still attracts the elite from across the planet. Cimperman has amassed a number of film and TV credits in the past few years (Jefferson, Nympho’s Diary, Rayven Choi, The Man Van, etc.) and is the female lead in Eight and a Half Circles. The fact that this Slovenian born and educated actress exhibits not even a hint of an accent in her role as the American “Cat” in this film, gives profound credit to both her acting as well as her focus on the language of the film. Ana confirms that this was paramount to her approach as Cat stating, “The most difficult part was probably the fact that this was my first film in English. At first, it is really hard to be relaxed and natural in a language that is not your mother tongue, but with enough rehearsal you can get past it. There is also this pressure of sounding as American as possible to not seem out of place in a movie where everyone else is American. After a while you have to let go of that and just focus on the scene and the present moment.” Certain scenes were framed in ways which excluded Cat’s face, in order to portray Omm (the male lead role played by New York actor Joey Maida)’s sense of confusion and disorientation. This required Ana to focus on how to communicate with her body rather than facial expressions or dialogue, creating yet another challenge for her role. Her commitment to reaching for the new places that the role of Cat brought is exactly the reason Eight and a Half Circles creator/writer/director chose Ana. As a grantee of the David Lynch Foundation, Kresal not only experienced filmmaking in the US but also struck a harmonious chord with Lynch. Both artists enjoy the psychological approach to storytelling. Kresal used his experience as an Alpinist to convey the mind altering states that these adventurous mountaineers are subject to experiencing. This is the core of Eight and a Half Circles. Gregor describes the film as an Alpinist’s reflection of Dante’s Inferno. As Omm (the male lead) is preparing for a climbing expedition in Pakistan, he gets the feeling that something might go wrong; which he shares with his girlfriend Cat. He is agitated. Every night he wakes up restless and feels he is drifting further away from Cat. He then wakes up in a hospital room and is told that he has already gone on his expedition, fell ill and was transported to the hospital. In that moment he realizes that Cat is really the woman nursing him while he is recovering from surgery and that his whole relationship with her was just a fragment of his imagination. Kresal comments, “Eight and a Half Circles is extremely important to me as it is essentially my life story. When I completed the script, I immediately thought of Ana Roza who I had met a few years prior in Ljubljana, Slovenia. She plays the role of Cat, Omm’s girlfriend who turns out to be just a fragment of his imagination that his mind creates when he is recovering from surgery in the hospital. Her character had to be grounded but it still had to possess a dream-like quality which Ana managed to pull-off perfectly.” Ana recalls, “Gregor knew me from my work on the feature film Tomorrow in which I had the lead role. I see some similarities between the character of Mojca, who I played in Tomorrow, and Cat as they are both gentle, thoughtful and sensible women so perhaps that made the decision to cast me easier. I was only familiar with Gregor’s work on the documentary Sfinga (The Sphinx) so I was not sure what the tone and the story of the movie would be. I knew it was going to feature mountaineering so I was expecting more of a dynamic, action-based film. I was pleasantly surprised when I read the script which has many layers and depth. It features interesting multi-dimensional characters so it took me several readings to figure out what was really going on. This was a good sign for me as it meant there were many ways to approach this character.” 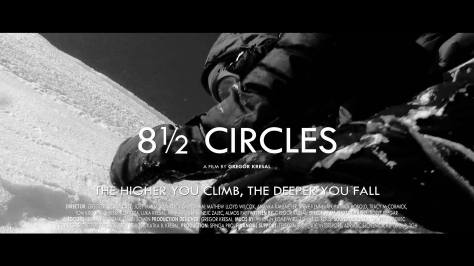 The viewing audience is often required to contemplate what is reality in Eight and a Half Circles as well as the true motivation and actions of the characters in the film. This makes the surprise ending even more gratifying…SPOILER ALERT. The surreal nature of Cat necessitated contemplation from Cimperman who states, “In the movie there is the real Cat who is a nurse and also the imaginary one, which Omm’s brain created based on the brief moment when they met for the first time. The imaginary one was definitely more mysterious and inquisitive while the real one was more supportive and caring. At first, I almost fell into the trap of playing her in a dreamy and angelic way… which would have been completely wrong because it is important that she is a real and grounded person. It is what keeps the viewer interested in their story and the loss at the end greater when you realize none of those intimate moments between her and Omm really happened.”

Eight and a Half Circles is a film which appeals to the audience in many different ways. The action and adrenaline of mountain climbing with its potential dangers, the inner workings of the human psyche as a way to deal with threats, and the intrigue of the unknown; all are present and accessible in this production. The anticipation at many film festivals, based on word of mouth alone, are proof of film’s ability to peak interest. Cimperman is just as excited about the public’s reception of this film, which she considers to be a major achievement. She is excited to take on more English speaking roles but admits to being drawn to the cerebral aspect rather than daredevil influenced roles. Cimperman reveals, “Joey Maida (Omm) is a very talented and hardworking actor based in New York. I admired the way he dived into the role although it dealt with a sport he was not that familiar with. He was not afraid of challenges and even traveled to Europe to shoot the second part of the movie in the Italian Alps. I have done adventurous sports in the past and I enjoy the rush but, as a working actress, being injured means you cannot work. Acting is my true passion which means that anything which keeps me from acting is not worth giving that up.”