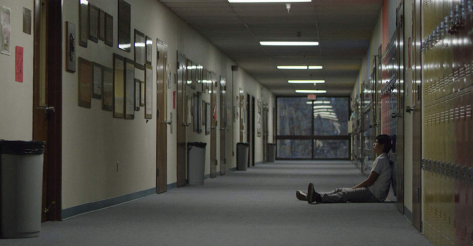 Solo may refer to a musical statement which announces mastery and emotion. It may also refer to piloting a course by one’s self. Both of these definitions find their union in director David R. Liu’s film of the same title. Known for his New York Jazz Film Festival award-winning film Bebop, Liu’s enlistment of “Ivy” Xiaoyuan Xiao (at the behest of producer Xin Li) to help him manifest the story testifies to the renown this Chinese born producer has amassed throughout the Indie film community. Solo’s status as an Official Selection at festivals including CAAMFest, the FARCUME International Film Festival of Faro, the Los Angeles Asian Pacific Film Festival, and numerous others confirms his trust was well placed. Solo is as moody and ethereal as the Jazz music which serves as the backdrop for the journey of the young boy who is so central to its plot. His interaction resonates with dissonant harmony against his father, while his challenging situation is the moving picture personification of the beautiful awkwardness of Thelonious Monk or tempered uncomfortability of Charles Mingus. This film is as much for Jazz lovers as those who understand nothing of the genre but appreciate emotional struggle. 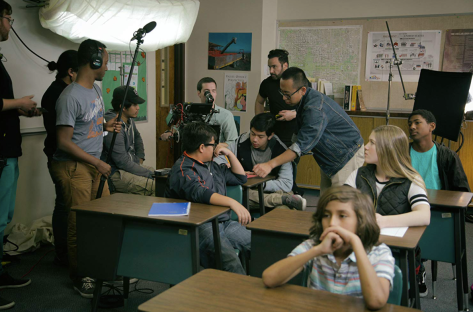 Max Tepper stars as Jeffrey, a teenage saxophonist who is adjusting to life after his parents’ separation and impending divorce. His troubled father Alex (played by George Tsai of the FX series Mayans and Netflix’s two-time Golden Globe Winning original series The Kominsky Method starring Michael Douglas and Alan Arkin) is at a point of crisis, having lost both his marriage and his job. The comfort Alex feels with the presence of his son is counterbalanced by Jeffery’s musical desires; a nagging reminder of his soon to be ex-wife’s imprint on their offspring. 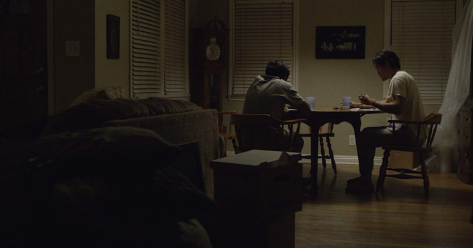 Solo offers no huge effects or complex production numbers; which is precisely what stands out about this film. The producers, director, crew, and cast have cohesively created a mood of gravitas that permeates the entire story. The intensity of life’s uncomfortable relationships and moments are to be channeled into Jeffery’s artistic expression. It’s a fitting parallel to that of the artists who created this production. In the same way that “Birth of the Cool” featured Miles Davis rejecting the template of jazz of that era for a slow moving artistic statement, Solo echoes this tempered language with a fictional tale of a present day aspiring horn player. It’s not so much a jazz story as a human story. Ivy confirms that you don’t need to be a music aficionado to connect with Solo, stating, “I am actually the opposite of Jeffrey if I have to make a connection. My parents bought me piano when I was interested in learning but the passion only lasted a short time. I had so many interests learning an instrument growing up but unfortunately, nothing lasted. Solo reminded me how lucky I am to have open-minded parents and opportunities to explore. That’s the essence of our film and why I wanted to be involved in telling it.”

Every genre of music has fans, but jazz is among the few that has devotees. Variations of jazz exist in almost every culture in the world, distinct from one another but sharing common influences. The diehards, the connoisseurs and the aficionados ingest the sounds of a good jazz band like a fine wine and know every hook and riff like the face of an old friend. If one were to ask them where to find the thriving genre’s modern hub, they would answer in unison: Buenos Aires.

That’s where Ramiro Nasello found his calling. Nasello was born in Olavarria, Argentina, where he took his first steps toward his lifelong love of music at 10 years old. Starting off with the piano, Nasello felt at home around music and musicians. It was when he discovered the trumpet, though, that he really came into his own. He moved to the city of Buenos Aires at 14, where his natural talent caught the attention of the iconic Argentine trumpeter Roberto “Fats” Fernandez. A major influence in jazz music at home and internationally, Fernandez is well known for his work with world-renowned musicians including Ray Charles, Roy Eldridge and Lionel Hampton. He took the then young Nasello under his wing and helped him realize the extent of his innate gift.

“My style was further defined after I met my mentor Roberto “Fats” Fernandez,” Nasello said. “It was a big step up for me as a musician and trumpet player at that time.”

At 17 he was introduced to Fernandez’s close friend, music legend and eight-time Grammy Award-winning trumpeter and composer Wynton Marsalis. Fernandez had written an original composition for Marsalis, “Luces de mi Cuidad,” aka “Lights of my City,” and Marsalis happily agreed to perform it as a guest artist on Fernandez’s album La Musica y La Vida. Nasello sat and listened as Marsalis played, and found himself moved to the core. Then, he got an opportunity many musicians spend a lifetime dreaming of.

“He did one take, and he was playing so beautifully I started crying like a kid,” Nasello recalled. “I also got to play for him. He was very nice and very encouraging to me.”

Throughout the ‘90s, Nasello had focused primarily on the classical side of trumpet. He became incredibly skilled during that time, and even held the prestigious principal first trumpet chair position from 1993 until 2000. But after training under Fernandez and hearing the sounds of Marsalis, he began to focus his efforts more on jazz and popular music.

Through his training, Nasello quickly became one of the most sought-after trumpeters in modern jazz ensembles. He’s played all over the world, and with some of the most recognizable names in the genre.

“I did a collaboration with ‘The Latinaje Project,’ a Latin jazz band led by the great bassist, composer and arranger, Guido Martinez. We played lots of high intensity music,” Nasello said of one project. “They put me in charge of the trumpet and flugelhorn solos. That was an all-star band that I was fortunate to be part of with musicians like Daniel ‘Pipi’ Piazzolla, Astor Piazzolla’s grandson. We played many concerts and I participated on the self-titled debut album with them.”

To be band mates with Astor Piazzolla’s grandson is no small achievement. “Pipi” Piazzolla’s grandfather was a revolutionary figure in Argentine jazz and tango, and helped put the country on the map as a major influence in both Latin and jazz music.

“‘Montecarlo Jazz Ensemble’ was an album recorded for a UNICEF fund-raising initiative for the Indian descendants in the north of Argentina,” Nasello said proudly. “It was a collaboration of the most renowned artists of the Argentinian music scene for a good cause.”

Shakespeare once wrote that music is the food of love. Jack Kerouac called it the only truth. And Ramiro Nasello sees it as a gift shared between giver and receiver.

“When somebody comes to me and says, ‘Thank you for your music,’ and I can see in their eyes that they enjoyed that moment, that we felt the magic of music and they felt it too, it really is a beautiful thing.”

Nasello is currently working on several new and exciting projects with other internationally renowned musicians including Italian drummer Andrea D’Angelo, who is known for his work with the bands Human Feel, the Matt Wilson Quartet and Tyft. The two have already begun planning their first album, “Inside Out,” which they will begin recording in 2016 under the name of the D’Angelo-Nasello International Jazz Collective Project. The new project will bring together musicians from Italy, Argentina and the US, offering audiences a modern and culturally rich jazz flavor.

Film composer and guitarist Daniel Raijman got his start playing music across Buenos Aires, Argentina, where he grew up. His expertise in composition and arrangement for film has made him a mainstay in the industry, but it’s his lifelong fascination with the study and performance of string instruments, which has led him to his rewarding career in the field.

Raijman toured with his first group, Orquesta Kef, for four years between 2006 and 2009. The band puts a modern twist on the traditional eastern European Klezmer style, a genre with long ties to Jewish culture in the region. As a guitarist for Orquesta Kef, Raijman toured venues throughout Argentina and Uruguay.

According to the band’s website, “It all began at the end of the year 2000, near Chanukah, when a group of young musicians wanted to express and share their talents with the community. Shortly after the premiere, Kef found its own unique musical style. Kef is the number one Klezmer Band in Argentina and one of the biggest in Latin America.”

Beginning in 2007 Raijman also toured with Quinta Estacion (Fifth Season), a group that he founded alongside award-winning pianist and composer Sebastian Kauderer. A contemporary jazz quartet, Quinta Estacion was a hit at venues in Argentina and took an inspired approach in its performance of modern jazz and funk.

“We wanted to achieve that sound similar to our influences such as Pat Metheny and Brad Mehldau. The challenge was to write complex harmonies and fit them into beautiful melodies,” Raijman said. “We played in some of the best jazz clubs in Buenos Aires and recorded our album in 2008.”

Heavily influenced by his years playing with Quinta Estacion, Raijman’s next band, Pentafono, was a jazz quintet, which drew an eclectic sound from its Latin American and jazz roots.

“I composed most of the songs based on odd meters and rhythms from Latin America and I wrote challenging harmonies and melodies that were fun to play,” Raijman said. “I wrote some of the songs while I was studying jazz composition with New York-based composer Guillermo Klein.”

Pentafono regularly played and toured around Buenos Aires, and in 2012 recorded their self-titled debut album.

Most recently, Raijman played guitar for the soundtrack for Triggerfish. The film, which is set for release later year, follows the fictional, eponymous punk band Triggerfish as they embark on a night of debauchery and unhinged excitement.

“I was working for Megan Cavallari when she scored this film. She asked me to record guitars for this film and I totally enjoyed it,” Raijman said. “I had to record music ranging from punk to hard rock to blues – all kind of different styles.”

With such a diverse background of influences, and years on the road and in the studio, Raijman’s seasoned expertise has made him a go-to guitarist and composer in a highly competitive field. In addition to Triggerfish, Raijman has lent his extraordinary talents as a composer to the scores of the films An Opening to Closure, Monster Hunters USA and Day Care Center, Love, the documentary 8 Seconds: Humane Decision Making of the IDF and many more. Raijman is also slated to play guitars on the upcoming film Jay Rocco.