Like many of us, Ming Qiu is fascinated by the complexity of relationships. Her secret superpower which separates her from most mortals is that, as a film producer, she has the power to give life to the stories of relationships which she finds interesting. Making a film is part discovery, part catharsis, and a whole lot of work. The diversity of the films she produces mirrors the vast array of relationships and their emotional toll that each of us can experience in our lives. This is what filmmakers do, they present stories that makes us laugh, inspire us, and hopefully help us to understand each other and ourselves. One day Qiu is making certain that furniture is burning properly (wait for it, you’ll find out) and the next she is reverse engineering the weather…it’s all a part of movie making and the wild ride that draws creative personalities such as Ming into an industry that gives something to the world.

Evan Bluestein gave Ming the script for his film “Leo Johnson” and she immediately knew that it was too good to not be a part of. The genre was comedy and romance but it was the deeper meaning that cinched the deal for this producer. At its core, “Leo Johnson” is about fear in a relationship and what we are willing to face. It’s an idea that Qiu would like more people to believe in, the notion that we would not only reject the fear which makes relationships so hard but that we would also face our personal fears down for those we love and cherish. Her way to promote this sensibility was to produce this film which espouses such notions. 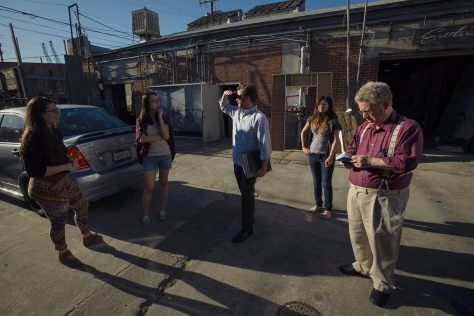 Director Evan Bluestein wanted Qiu to produce because, in addition to witnessing her consummate professionalism on previous projects, her dark humor and fearlessness reminded him of the female lead in the film. He notes, “It’s always tricky to find the balance between humor and heart, and I was fortunate to work with Ming because she is such a collaborative, creative, and a passionate producer. From the beginning of our development process, Ming was an advocate for the love story and for making it the central dynamic from which the plot would grow. What I truly appreciated about working with Ming is her passion for the possibilities of the medium. She has a unique point of view that I’m sure I cannot sum up, but I know it has to do with dry humor and love and seeing the best in people. And that is something that makes its way into all of her films and is the mark of an artist.”

Qiu’s determination was challenged at several stages by factors which sought to impede or stop the film’s creation. The usual expected schedule conflicts, rental break downs, and even the Director of Photography leaving near the completion of film could not hamper the film and its producers resolve, in fact…it may have reaffirmed this determination. As sometimes occurs, the characters in the film itself were a metaphor for the cast and crew in so far as love kept them from giving up on their shared goal. In “Leo Johnson” the male lead (Ben) is extremely afraid of fire but he distracts his friend by setting her couch on fire so that his girlfriend Donna can escape during their ring-stealing crime scene; extreme limits for love, just as Ming wished. Being able to keep a cool and positive head during challenging times is made easier by a sense of humor. Qiu boldly states, “I can’t imagine a producer who isn’t able to be funny during these challenging moments. It’s a quality that keeps you and your team healthy during all the production headaches. In fact, all great producers I know are funny people. Film producers who are not funny probably have all pivoted to other careers.”

Rosita Lama Muvdi (Director of “Till I See You Again”) echoes that statement proclaiming, “Ming’s amazing sense of humor, coupled with her dedicated abilities as a talented producer, made working with her on ‘Till I See You Again’ an unforgettable experience. Her intoxicating personality made anyone on the production team excited to be around her, which, in turn, made the set a fun and productive environment to be in. With all the demands during production, Ming was always there to make sure production ran smoothly, ensuring both the cinematographer’s and my vision were able to come to life.”

“Till I See You Again” is a benevolent tale about time travel. While most time travel tales are about riches or crime (and end up with karma serving justice), this tale focuses on a father who simply wants to take care of his daughter. An older man (James) calls his daughter but is ignored. He is given a chance to travel back and have a younger version of himself shower his daughter with gifts and love. Through the experience we see that father and daughter in present day have a warm and full relationship.

What was so unusual and challenging for the filmmakers of “Till I See You Again” was that there was essentially no dialogue in this story. Qiu admits that she is fond of dialogue in her productions and this was new territory for her. What was also unique was the writer’s determination to film one particular scene that communicated the time travel effectively to the audience. Ming describes the scene and how it was created, “Rather than use VFX, We shot the scene with everything moving in reverse direction with the rain from a rain tower. Our actor had to rehearse quite a few times to make sure his walking backwards looked 100% like walking forward when the footage was rewound. The visuals turned out amazing. Looking back at our night in/next to cold rain, all of us felt that having certain constraints actually pushed our creativity to a new level.”

There are many attributes which make Ming such a fine producer: an understanding of the workings of each department of the production team, extraordinary communication and organizational skills, insight into story development, and others…but it’s her curiosity which she feels makes her most important. The desire to find a creative solution to a shared goal is one she shares with the characters in these films. For another film she currently produced titled “My Zombie Club” the Art Department was having difficulty discovering a means to attach vines growing around the main characters derriere (a curse given him by a zombie lord). A diligent producer, Qiu researched until she found the perfect wardrobe piece that would serve both the art department, VFX department, and still allow the actor to retain some modesty. While it’s an unusual and humorous example, this is the challenge of any relationship…finding a solution that we can all live with. Ming Qiu is an living/professional model of the ideas illustrated in her films.