Edwin Perez takes acting very seriously, not in a dramatic sense but rather in the way that he gives every bit of himself to the role. Many of those in his profession give their psyche over to a character but in the film “El Gigante” Perez approached his lead role of Armando with a level of commitment that is often used to refer to such intense leading males like Daniel Day Lewis, Tom Cruise, and others. Edwin’s intense performance is augmented by the bilingual dialogue and the extreme physicality of the storyline (the actor performed all of his own stunts). This emotionally draining Horror story (for both the audience and the actor) was fertile ground for Perez to exhibit his intense commitment to the film. His eclectic credits include animated productions (Nina’s World), Romantic Comedies (Heartfelt), and others but “El Gigante” is best described as Action/Horror. Edwin seems custom tailored for each of these roles and his performance as Armando might well be the shining star of them all. The process was draining in a number of ways for him but the success of this film and his performance justify the toll it took. The film has appeared at multiple festivals worldwide, winning over forty international awards and receiving acclaimed as one of the best horror short films ever made, for which the director has said that “This recognition wouldn’t be possible without Edwin.” It has also gone on to inspire a Japanese comic book series based on the film, distributed by Studio Kurabayashi.

The immense popularity that this gritty film received had to start somewhere. For the film’s director Gigi Saul Guerrero that spark was during Edwin’s audition. She professes, “Edwin Perez is by far one of the most outstanding and committed actors I have had the pleasure of working with. The moment he auditioned for Luchagore production’s most famous/successful short film “EL GIGANTE” there was no doubt that he was born to play the lead role. “EL GIGANTE” didn’t only involve a lot of emotion and pain in the horror world we built, but also a great deal of physical strength and creativity from the actors.  Edwin showed enthusiasm and initiative when it came to creating the atmosphere involving the character. He did not disappoint transferring the uniqueness of his craft from the audition room to set. Luchagore considers themselves lucky to have collaborated with Edwin.” The audition scene which won the lead role for Perez is that of a man fighting for his life and his family. While the setting is violent, surreal, and disturbing, Edwin focused solely on the humanity of his character and his fear for his loved ones rather than for his own life. While action is involved, it takes a backseat to the desperation the character openly exhibits.

“El Gigante” is the story of Armando (played by Perez) who is attempting to get his family across the US/Mexico border in search of a better life. He awakens in an unknown room, his body broken down and a Lucha Libre mask sewn onto his neck. He is forced to fight for his life against a sadistic family of killers in an effort to escape and find his wife and child. While the movie falls into the Horror genre it also has equally important social connotations. Perez himself immigrated legally into Canada with his family as a young boy. Armando’s plight and the potential dangers is a story not unheard of with those whom the actor has known. The actor made use of his Latin roots to increase the authenticity of the character, working with a dialect coach to perfect his North Mexican accent (the region from which Armando originates).

The actor’s penchant for physical training paid off in spades when it came to the action scenes that were so vital and so believable in “El Gigante.” While he may not have been a wrestling/MMA super fan, his physical conditioning allowed him to quickly be at a level required for training. Perez communicates, “Fight sequences are like a dance, you have to work with the timing and abilities of the performers. We had a stunt coordinator and a technical consultant for the authenticity of the wrestling moves. The fights were choreographed based on the things we could do physically but it was very demanding. The whole film is also an homage to lucha libre (Mexican wrestling) so we also had to stay true to those guidelines. I was a fan of wrestling as a teenager so I was familiar with the popular moves. That’s where we started and then adapted these to what worked best on film.  With the size difference between David [Forts] and I, we thought it would be really great do some aerial moves. I also really wanted to show the brutality of the beating Armando suffers. We worked on my ability to take a hit and make it look devastating. Needless to say ,I took a lot of bruises throughout this film. During the fight scene with El Gigante, David Forts was supposed to lift me up in the air like a plank over his head. We used rigging to do this. David is a big strong guy but I’m not as light as I look. During one particular take, he threw me against the ropes in a classic wresting set up. The move was for him to grab me by the shoulder and inner thigh; I would plank and then he would press me above his head. Plans don’t always work and he missed my thigh, resulting in his hand slipping right to my groin as he went to lift me over his head. I took an extra-long pause on the canvas after I came down.” 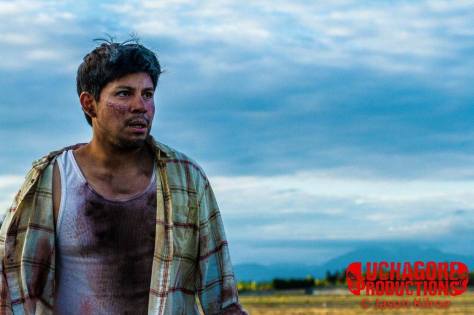 There was a lot of pain and discomfort involved in “El Gigante” in the script and in the making of the film, not that Perez considers this something he would avoid. The somewhat hyperbolic nature of the film seems actually possible in the real life climate these days. The filmmakers and the cast wanted to make a film which depicts a heightened state of the reality for the people of Mexico who risk it all to gain a better life for themselves and their loved ones. The actor concedes that he was uncertain at the audition for “El Gigante” if he would be offered the part yet Guerrero and others were immediately convinced of his greatness. There’s a bit of an analogy in this facet of his involvement and the story itself. Immigrant comes to a land and is able to achieve greatness and exponentially add to the success of others. Armando may have never been given the opportunities of Edwin but Perez is determined to portray the character’s greatness with his own abilities and talent.