Artists often bring up ideas that we may or may not agree with but it is important to see things from differing viewpoints. The artistic mindset is about the freedom to express ideas; they might be truth or they might just be opinion but in a well-balanced society it’s important to have all ideas heard and then weighed out. Whatever your opinion is on any particular subject, there is someone who disagrees with you, and that person should be important to you. By presenting an argument that challenges your belief, you either become more committed or you reassess; either way, this person has done you a favor. Artists of many different mediums have challenged our thinking for eons. Filmmakers like Xing-Mai Deng are simply the newest manifestation of this. As a cinematographer, Deng is the modern day painter with film and digital images as his canvas. The way the visuals appear in the Drama/Thriller “Drone” (2015) affects the viewers’ attitude towards one of the most modern approaches in warfare in an almost imperceptible manner, but achieves the desired emotional impact. It was for this very reason that producer Abi Corbin sought out Xing-Mai and persuaded him to take on the project. 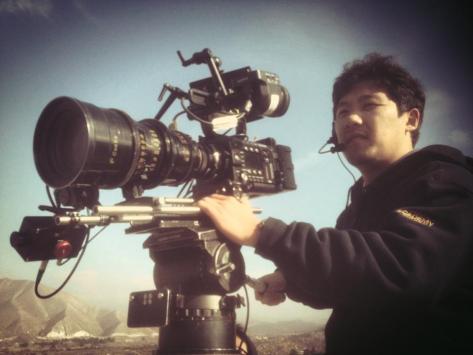 “Drone” appears at first to be a film about the military when in fact, it is about humanity. It was his own personal experience with these two factors that actually convinced Deng that he wanted to be a part of this film. He explains, “Before working on the project, I happened to know a few people who were working on developing treatments for veterans with PTSD. Among them, the air force veterans were the majority and most of them were military drone pilots. Through my friends, I learned that even though the drone pilots did not see their enemies and the actual battles, they had a higher chance on incidence of PTSD because of their working schedule and the suppression of sleep. I knew what the pilots were going through. I invited my friends to the screening of the completed film and they all felt that the film was a realistic portrait of a drone pilot’s life.”

“Drone” is a story about a rookie air force drone pilot who finds himself increasingly attached to a target as he watches from halfway around the world. As a newly minted drone pilot, Matt (played by Daniel Sharman) enthusiastically flies his first stalk and kill mission, unconcerned that he knows nothing about the enemy target in his crosshairs. As the hours of surveillance turn into days, then a week, he finds it increasingly difficult to see the target as a mere white dot on the screen. When the strike order finally arrives, Matt must face the very real person behind the pixelated image.

Making any film is not as simple as displaying the actions of the characters onscreen. A story that concentrates so intensely on the emotional inner conflict of the main character requires a great deal of planning and expertise on the part of a DOP to properly convey this emotional turmoil. The subtlest of changes can achieve substantial returns in eliciting the proper response from a viewer. Deng prepared his concept in terms of the tone and the look before meeting with “Drone” writer Tony Rettenmaier to present these two different worlds he had created. Lighting in particular was key for this film as Xing explains, “When Matt is alone, his life is not fulfilling to him. To achieve the lonely feeling for the audience, we made sure the lighting on him is half a stop darker. It appears as if his life is always one shade darker than the rest of the world. And when Matt was doubting his world, we used a lot of close-up shots with a wide-angle lens on Matt to bring out the emotion. We placed the actor very close to the lens so he got distorted by the wide-angle lens, while other actions are happening in the background. After the strike, Matt was crushed by what he did. We placed him further away from the camera, using a longer telephoto lens to compress the background just to show how small he is compared to the world he is doubting.” He continues, “Most of the scenes were in the cockpit. We did research on what a real drone cockpit looked like. It was actually very different from what we imagined. In reality, the pilots were operating the drones flying on the other side of the planet, so they usually work during the night. In order to keep the pilots awake, the cockpit was usually lit with bright fluorescent lights. It is very bright and flat. We wanted the scenes to look interesting so we decided to use minimal lighting fixture to achieve the dark and dramatic look. The production built this on a stage so I had total control of the lighting. Most of the lighting was motivated from the monitors in the rack in front of the two pilots with cold colors. That was a very planned out cinematographic choice.”

The manner in which the characters and their surroundings are framed is exceptional in communicating what they are feeling. Whether it be of a claustrophobic nature or the insignificance of being miniscule in an open space, the viewer feels the impact of this perspective. The short, cutty, and lock-off shots of the main character early in the film contrast with later long moving shots to show the internal struggle of the character and the tension of the situation when Matt must decide to pull the trigger during the strike. We immediately understand the tunnel vision and comprehend that time is slowing down for this drone pilot. During the final sequence of the film as Hunter (played by Michael Trucco) tells Matt about his own story, the extreme-wide shot inside the drone hanger with a military drone in the foreground and the rusty roof on top depicts how small they are compared to the world of drone warfare. The metaphor relates that this kind of story happens every day.

One added benefit for Deng working on this film was an association with the famed Industrial Light and Magic who had allowed the production to use their drone model in conjunction with green screen shots. The investment was obviously well placed as Deng and his crew achieved a nomination for Outstanding Achievement in Cinematography (2015 First Film Festival) as numerous awards from others such as the DisOrient Asian American Film Festival, Phoenix Film Festival and numerous others. While these accolades were appreciated by Xing, he reiterates that his connection to the veterans who have been in these situations and the positive response which he received that “Drone” accurately and honestly portrays the experience of these men and women means that his highest goal was achieved.