Phil Luzi is in an underground water cave in the Mexico and he is nervous. “Hey, are there snakes in here?” he says with concern. His inner monologue is comparing the pros and cons of the situation. On one hand, he is filming a feature film in a tropical climate, far away from the cold of the Canadian winter. He is staying in a beach house with a personal chef at his disposal. To offset that, he finds himself wondering what manner of science fiction horror film based creature might rise from the dark and murky depths in which he currently finds himself. Luzi wonders exactly how he arrived at this point in his life. Oh…he wanted to be a successful actor and he is one. Still, does danger have to be part of the equation? Phil recalls when he first met writer and star of The Devil’s Tail (the film being shot) Samantha Swan. The two met and worked together at The Second City in Toronto. This is also where he met his Devil’s Tail co-star, Rob Fulton. Their work on previous projects together led Swan to write the role of Dave specifically for Luzi. She confirms, “The director (Christopher Comrie) and myself always wanted Phil in the film. I wrote a part specifically for him that only he could play. I can’t imagine anyone else in that part. Once on board, from first read- through to recording ADR in post-production, Phil Luzi commits with great energy and humor. We always considered ourselves lucky to have him on The Devil’s Tail and would be lucky to have him on any of our future films.” 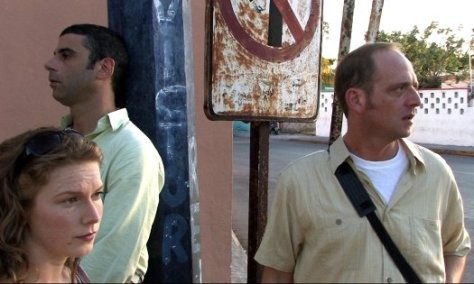 Luzi plays Dave in The Devil’s Tail. Dave is that loyal and abiding friend who would do anything if you asked. Even if he is scared, even if he thought for a second that he might die, even if he knew it was a bad idea…he would be there for his friend. Dave is the low-status character that gives the high- status character the courage they lack when they need it the most. He’s that guy in a group of friends that’s along for the ride but never knows for sure where they’re going. He’s the ‘YES’ man and everyone counts on it. In the storyline of The Devil’s Tail, Dave follows his best friend (Pete) to a strange land to find someone he doesn’t even personally like, all because he loves Pete unconditionally. Like all nice guys, even Dave has a boiling point. He reaches that boiling point after much tested patience and compliance. It’s always fun to watch that person who never loses it FINALLY lose it and then immediately go back to being that docile team player everyone counts on him to be. Phil states, “The Devil’s Tail was my first large role in a feature film. The thought of it was at first intimidating. I was working with actors with so much more experience under their belts. I was afraid that I’d show up in Mexico to a wall of ego and rejection. I was challenged to muster my own self-belief and confidence, not only in my abilities as an actor but in my ability to socialize and open myself up to learning, adapting and becoming part of a fresh social dynamic. It was a challenge to consider myself a talented actor, deserving of this opportunity. It was an exercise in self-belief in the face of doubt and insecurity. More experience doesn’t necessarily make you better than another actor. It just gives you the confidence and belief that you can conquer any fleeting fear of failure. That is a huge lesson.”

The Devil’ Tail is the type of film which contains something for everyone; adventure, romance, danger, even comedy. Dave is the comic relief of The Devil’s Tail. The storyline itself is intense. Pete (Fulton) goes to a strange country and into the backroads of the Yucatan Peninsula to find his missing friend (Eddie) and the unrequited love of his life Kate. Danger is inevitable, and Pete’s courage is found in Dave – that friend who always has your back and gives you so much confidence, you think you can do anything. Dave is Pete’s sidekick, the Robin to his Batman. What Dave lacks in courage he makes up for in his belief in and love for Pete. Dave is the quintessential best buddy who isn’t afraid to look like a fool, to suffer ridicule at his own expense, and to get wet, or dirty, or go anywhere (even climb a ridiculously tall ancient pyramid) all because he loves, admires, and respects his best friend. Luzi professes, “I love Dave. I’d like to think that to some extent I’m a lot like Dave. The film’s hero Pete would not have succeeded in finding Eddie and Kate in this intimidating strange place if it wasn’t for the companionship and encouragement of his buddy Dave. Truthfully, this is probably one of the things that actors love about what we do; if only for a little while, we can become that better person that we aspire to.” 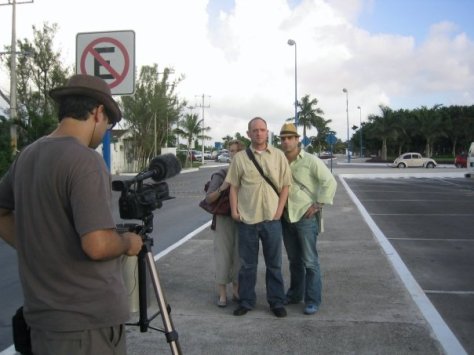 If one is attempting to be a different person, you may as well be adventurous with your surroundings. Luzi admits that when the filmmakers spoke to him about the location of the shoot, he was excited. The location of Tulum, Mexico was, for the most part, paradise. Living in a large house with a private pool, beach and chef felt like living a dream for Phil. Of course the cast and crew were there to work, not to luxuriate. Mostly shot on location in the surrounding area, the environments were dark, scary, strange places. When not in the murky depths, Luzi’s fear of heights was challenged by climbing the ancient Mayan pyramids. Not many of us would be fond of the idea that facing some of our greatest fears would be captured on film for the world to see, especially while it necessitated keeping a straight face…or worse, being funny. Still, Phil admits that it was a growing experience for him that he was happy to take part in. He gives copious praise and credit to the film’s writer and star as he admits, “Samantha [Swan] knew how to present me with challenges as an actor; to take me on a new journey through this character, and become someone new. I think above all else, Sam hired me because she knew I was capable and talented enough to devour the nuances of the soft-spoken character she wrote; to express a range of emotions from compliance, to frustration and fear, to the discovery of new found courage and self-belief. The growth of Dave’s character from beginning to end is in many ways the subplot to an adventurous love story. She never questioned for a minute her belief that I could carry the responsibility of bringing this character to life with depth, believability, and humor. In fact, to this day her belief in me during that time is what carries me through moments of insecurity and doubt.”