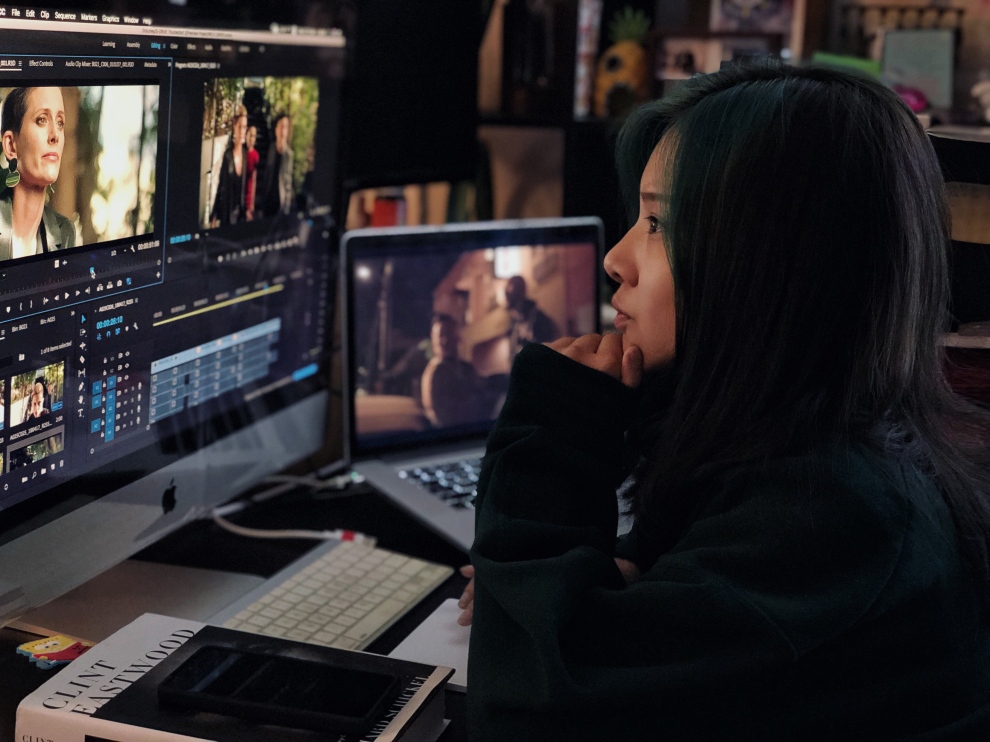 No matter how powerful the actors’ performances, how brilliant the director, or how adept the cinematographer, the film that audiences ultimately see is only as good as its editor. When tens to hundreds of hours of footage reach the editor’s desk, the success of the film is in their hands. Like a conductor who turns the unbridled chaos of an orchestra into the most beautiful of symphonies, a great editor can create a timeless masterpiece from a million disparate pieces, and that is exactly what editor Aijia Li accomplishes with every project she takes on.

Hailing from Changchun in northeast China, Aijia developed a passion for film and photography when she was just a teen. She spent her youth hungrily absorbing every movie she could get her hands on. By the time she reached college she’d accumulated a huge collection of movies, and was falling more in love with filmmaking with each passing day.

“I’ve had a passion for telling stories since I was a kid, and then I started writing stories and novels. But film has always been my spiritual food,” Aijia recalled. “In junior high, I spent all my allowance on DVDS, and now my parents still have a few boxes of my collection in the house.”

It was during college that Aijia seriously began experimenting with creating and editing her own films. She discovered just how crucial the editor’s job was to the overall process and realized that she had a natural aptitude for the delicate and often-arduous job. But editing films was not just something she was good at — it was something she loved. As an editor, Aijia was able to work hand-in-hand with the director to shape and define the story as they envisioned it. It’s not much of a stretch to liken her role to that of a midwife, guiding the film through the last critical stages before it enters the world.

“Film can [only] be film because of editing. A good editor can save the director’s life. I think in the digital age, the editor as the director’s closest partner may become more and more important,” Aijia explained. “The relationship between the director and the editor is like a marriage. After they finish shooting the film, the director spends more time with the editor than their own family. A good director understands that the film is the editor’s work. Before editing, what the director has is only the raw material.”

Nowhere is the power of that partnership between director and editor more evident than in the quality of Aijia’s work. Time and again she faithfully executes the director’s vision, blurring the line between art and science with equal measures of calculated efficiency and creative instinct. The 2018 drama “The Moon Also Rises” is a perfect example of Aijia’s unparalleled editorial prowess. Simultaneously moving and thought-provoking, “The Moon Also Rises” is an existential exploration of the impacts that people have on the lives of those around them, and the lasting traces they leave when they’re gone.

“This film is different from any other film I’ve edited,” Aijia said. “In the process of cross-editing, the difference between the images and the proportion of the frame gives the audience a strong sense of the drama’s conflict… The director of this film is a pure artist.”

Faced with the daunting challenge of creating a final product that lived up to director Yao Yu’s lofty expectations, Aijia’s work on “The Moon Also Rises” was a trial by fire. The resulting film is a testament to both her technical expertise and keen creative instincts. Impressed by the film’s concept and execution, judges at the prestigious Cannes Film Festival included “The Moon Also Rises” in the festival’s 2018 lineup of screenings.

Aijia had already cultivated a stellar reputation as an editor prior to “The Moon Also Rises.” Among her earlier works was the inspiring 2016 film “Short Term” about the unlikely paternal bond a homeless man develops with a young boy he finds living on the streets. Written, directed and edited by Aijia Li, “Short Term” explores the perennially-relevant subjects of poverty and racism and the impacts they have on the most vulnerable members of society.

“As the editor, the only way to make this kind of emotional story great is to edit by heart. I understand the characters, I feel them…,” Aijia explained of her process. “Another thing is, less is more. I don’t cut too much when there’s a heavy, emotional moment. I hold it. Because good editing is not just about skill and it’s not an editor’s showreel. It’s a story.”

That philosophy guided Aijia’s work throughout the editing process, and when critics and audiences watched “Short Term” it was obvious she had a gift possessed by few others in the field. The film immediately caught the attention of festival judges across the country. In addition to winning top prize at the 2016 Women’s Independent Film Festival, “Short Term” was also a semi-finalist at both the Los Angeles CineFest and the Hollywood Screening Film Festival. It was also an official selection at the International Family Film Festival, the Lady Filmmakers Festival and the Glendale International Film Festival — where it was also nominated for two additional awards.

“I have encountered many editors during my time in the film industry, but Aijia was my only choice to work on this film. Aijia has the best feel for editing out of any professional I have ever worked with,” admits “Deceased” director Pantha Rahman.

“I was incredibly impressed by the high level of emotion she added to my film… Ms. Li’s unlimited knowledge and understanding of editing was evident in every single cut she made… Her vast knowledge and wealth of experience were essential in building the film’s narrative structure… Without Ms. Li as the editor of ‘Deceased,’ the engaging visuals and sentimentally resonant narrative would have never come together, making me forever grateful for her work on the film.”

A great editor understands a film’s story and characters as well as they understand the technical aspects of the job. In many ways a film is a lot like an unassembled puzzle when the editor’s job begins. Only, this puzzle includes hundreds of extra pieces and there is no picture to reference. The only way to know where the pieces go and what they’ll form is to fully understand what the director’s vision is and how to bring it to life. In the simplest terms, that’s what Aijia Li does — from thousands of scrambled, disparate pieces, she builds stories with the power to move audiences to laughter or tears.